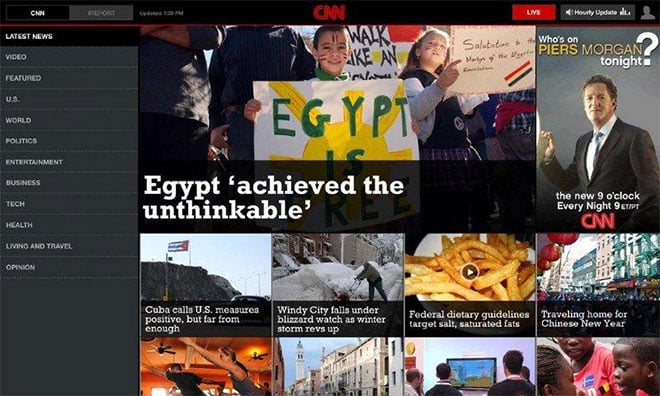 CNN launched a new Android application designed exclusively for Honeycomb tablets. Similar to CNN’s iPad version, the Android app is built from the ground up to take advantage of the larger screen of a tablet. News stories are presented in a variety of views including a grid-based layout that showcases several stories at once and a broadsheet view that includes a left-rail navigation. The app uses a nice two-pane layout to maximize the amount of content that can fit on screen while still making it easy to navigate.

The Android app is multimedia-rich and includes both video and images of breaking news stories. It is also the first tablet app to tap into CNN’s iReport which lets users read community-generated news stories. The average user can also contribute to the news by uploading images and videos to CNN’s iReport website. Commenting on news stories is available from within the app as well as sharing news on social networks such as Facebook or Twitter. If you have a Motorola XOOM, then the CNN app is worth checking out. It is available for free from the Android Market now and is compatible with tablets running Android 3.0 and greater.

Click through to the second page for additional details from the press release. You can also check out our hands-on review from MWC when we got an early look at the app.

HOW TO: Manually update your Nexus One to Android 2.3.3

Sick of waiting for your Nexus One to get the OTA update to Android 2.3.3 Gingerbread? It's your lucky day,...