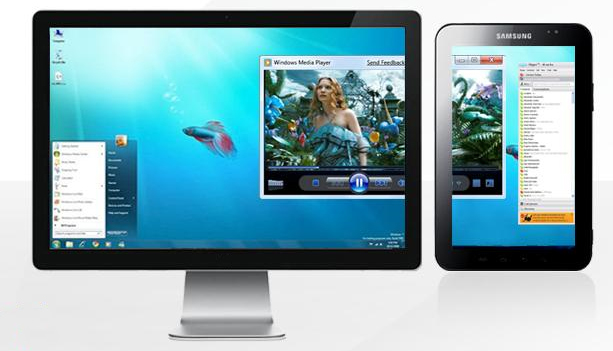 Today Shape Services has launched an Android version of their iOS app, iDisplay, which turns Android handsets and tablets into secondary monitors for computers. I’m not sure how useful this would be for smartphones, but for tablets, especially big ones like the Motorola Xoom that just came out today, it would be perfect.

iDisplay needs an app on the desktop to work (either Mac or Windows), and once set up, just punch in your computer’s I.P. address on your phone or tablet, and you’re good to go. Given that arrangement, I’m curious to know how much lag is involved, which could be a deal-breaker if you’re the kind of frantic multitasker that needs another monitor.

Personally, I run on two monitors right now (17 and 21 inch) and would love to have a third, mostly just so whatever tablet I end up buying isn’t left out of the bulk of my daily routine. Tablets as secondary monitors is an awesome use case for folks who spend a lot of time in front of their computers and have no real need for the extra computing power the devices provide.

You can find iDisplay in the Android Market here for a mere $4.99, or below in the iPhone App Store.

Samsung Captivate for AT&T can now be upgraded to Android 2.2 Froyo

Samsung Galaxy S users, which includes the Captivate for AT&T, have been aching for the Android 2.2 Froyo update. The...