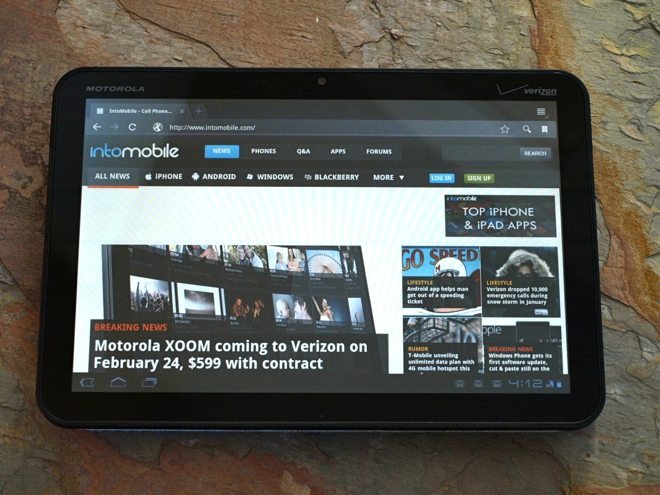 Verizon has finally come to its senses and will no longer make it mandatory for all Motorola Xoom buyers to purchase a one-month data plan with the device. Initially, the carrier planned on charging a $35 activation fee and a $20 fee for a month’s worth of data even if users wanted to buy the Android tablet without a contract and use it on Wi-Fi only.

Now, if a customer wants to buy the Xoom off contract for $800, and use it on Wi-Fi networks only, he or she can do so without being forced to pay for activation and a month of 3G data.

Verizon really has to be careful about how it handles pricing and data options for the Motorola Xoom. The Android 3.0 Honeycomb tablet is the only real competitor to the iPad right now – Apple plans to announce a successor to its popular tablet next week – and pricing will be everything. Most users who were anticipating the device were let down by the pricing options: $599 with a two-year contract, and $799 without a commitment. Removing the mandatory data option for the commitment-free buyers is the right thing to do.

As of this morning, Verizon has removed that requirement. I’ve confirmed with a Verizon Wireless spokesperson that if you purchase the Xoom for $800, without a contract, you will not be required to pay the $35 activation fee or sign up for any sort of data plan.

Best Buy has also updated its system to allow Motorola Xoom buyers to grab the tablet free of contract without paying an activation fee and month of data.

It’s tough to be optimistic about how well the Xoom will sell given the coming iPad, and the astronomical pricing. It’s a great tablet, and we were pretty impressed in our review of the Android Honeycomb device, but both contract and off-contract prices are pretty steep. Hopefully, Verizon will change that up a bit before journalists and bloggers get to jump on lackluster sales numbers.

Dab smack in the middle of Mobile World Congress last week, Google released an update to their relatively new Reader...