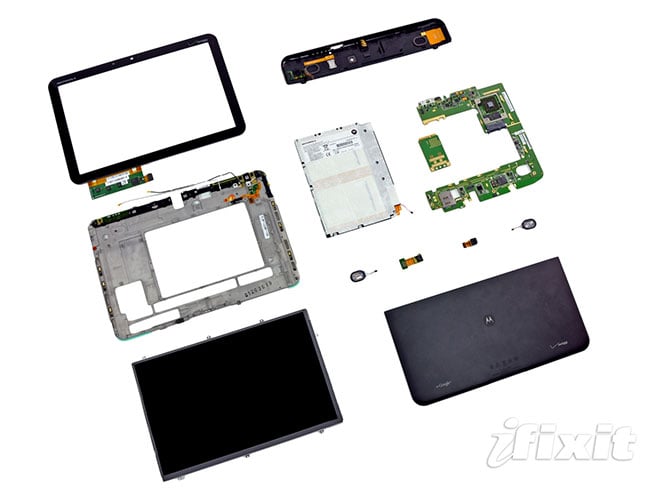 iFixit got their hands on a Motorola Xoom and tore the tablet down to its rails. During the process, the parts and repair company known for its teardown of seemingly every device released, discovered a few surprises including an easy to open, two-piece rear casing. This split aluminum and plastic casing is presumably designed to accommodate the 4G LTE upgrade, an upgrade that may require you to send the unit to Motorola for 6 days.

Once you get past the casing and the EMI shields, the prominent internal components on the logic board include the following:

According to iFixit, the XOOM has a repairability score of 8 out of 10. Many individual components like the camera modules are not soldered onto the board or bundled into groups, a design decision that makes these parts easy to remove and replace. Unlike Apple which switched to proprietary pentalobe screws for its iPhone 4, the Xoom uses standard screws and connectors. Lastly, the LCD panel and its outer glass are not fused so you can replace one or the other easily. The only knock against the Xoom is its 57 screws which make it time-consuming to disassemble.

We've seen a handful of rumored release dates, and then see those dates be pushed back. Now, a new print...