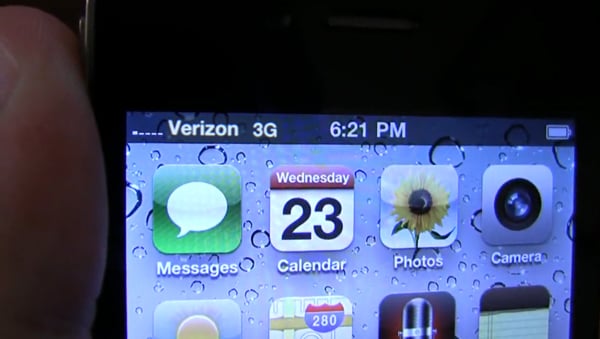 If you thought that the Verizon iPhone 4 was adequately shielded from dropping calls by bridging a gap in the frame in the bottom left (better known as Death Grip), Consumer Reports has some bad news for you. Just like the AT&T model, Consumer Reports has found significant signal loss when touching a specific part of the phone in low-coverage areas, which again means that though the phone receives high ratings, they can’t give it the Consumer Reports seal of approval.

Ask anyone who has one, and they’ll probably tell you the iPhone 4 is great. The 5 megapixel camera takes great pictures, the 3.5-inch 960 x 640 display is as sharp as you’ll find on a phone, the app selection is unparalleled, the front-facing camera provides video calling capabilities, the web browser is arguably the smoothest available (so long as you won’t miss Flash), and all of the usual smartphone fixings, like Wi-Fi, GPS, and 3G are included. It’s just too bad that it has some trouble with that whole making phone calls bit.

Despite the technical difficulties with Death Grip, it needs to be said that AT&T’s network is notoriously bad, and the Death Grip issue only compounds a bad situation. At least if you’re living on Verizon, you”ll won’t have to claw desperately for enough bandwidth to make a call or download an app, and the Death Grip thing can be fixed simply enough with a bumper. Those of you who have already taken the leap and picked up a Verizon iPhone 4, have you experienced any death grip-style issues?