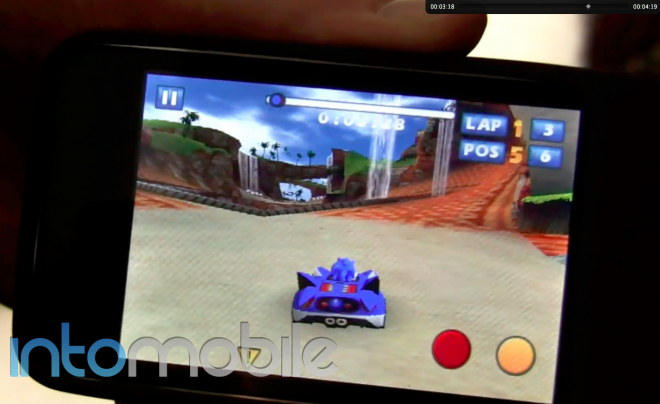 Sega was kind enough to invite us to a sneak preview of its just-announced Sonic & Sega All-Stars Racing game for the iPhone and iPod touch at the Game Developers Conference 2011 and the video below could be the first glimpse the world gets of the upcoming racing game on the mobile side.

The Sonic & Sega All-Stars Racing has already been on other gaming consoles but this is the first time that it will hit the smartphone side of things. Like many iPhone games, the vehicles are self propelled and you can tilt the device to steer as well as hit on-screen brakes and drifting buttons. If you’re not down with the tilting – it can obscure the view – there should also be an on-screen d-pad to control the steering when the game hits this Spring.

We looked at an early, early alpha build, so it’s not really fair to judge the game yet. The graphics and gameplay mechanics seemed cool enough but there was some choppiness that you would expect with software at this stage. Sega has said that it is definitely investigating the iPad but

One of the major appeals of Sonic & Sega All-Stars Racing is having the plethora of characters for you to race with. Of course, you get Sonic, Tails, Dr. Robotnik and others but they even pulled out some of the more obscure characters like Ryo from Shenmue and the dude from Crazy Taxi. Just seeing all these characters go by made me a bit nostalgic for my old gaming days.

Beyond the racing, there will also be some virtual currency but I’m unclear if that includes in-app purchases or if that’s just an in-game thing. Sonic & Sega All-Stars Racing doesn’t have Game Center support right now but the company hinted that the final version would, although it didn’t confirm this.

There’s no word on an exact release date but look for this in the Spring time with a “competitive price.” Check out the video below and let us know what you think.

We've been wondering when the Honeycomb statue would make an appearance at the Google campus, and that day is today....