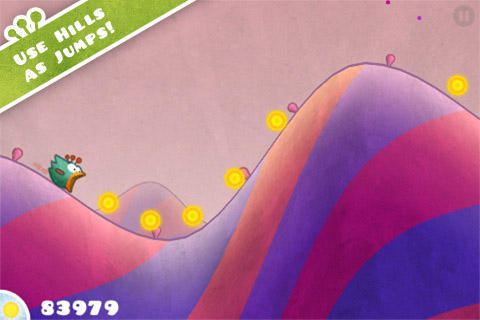 Even if you’ve been living under a rock for the whole year, you probably know what Angry Birds is all about. The super-addictive iPhone game has topped various mobile app store charts around the globe. Thus far no game came even close to Rovio’s baby success, but that could change soon.

Enter Tiny Wings, a new casual bird-flinger game that has quietly hit the AppStore last week and has since got a big attention on Twitter with some folks even calling it “the next Angry Birds.” Developed and published by Andreas Illinger, it currently has five-star rating on iTunes and that’s from 1482 people! Moreover, as of Thursday, February 24th, Tiny Wings is holding the prime spot on the “Top Downloaded” and second spot on the “Top Grossing” list in the AppStore UK. Impressive, don’t you think?

Check out what the game is all about from a short demo video below. And then try it out – you won’t regret a second. It’s only a buck (99 cents) after all…