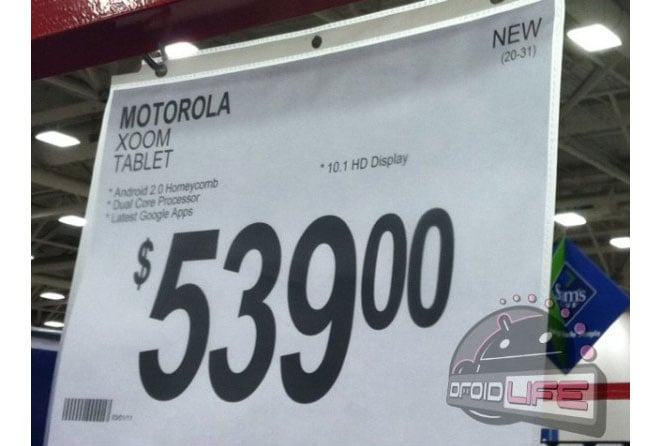 Droid-life got their hands on some promotional signage from Sam’s Club that suggests the WiFi version of the Motorola Xoom will retail for a mere $539. The information was reportedly obtained from a “Year Beginning” meeting of employees. A launch date was not mentioned, but the WiFi Xoom is expected to land in Europe in early April. It would only make sense that Motorola would launch the Xoom around that date in the U.S. That timing allows Verizon almost six weeks of exclusivity with the 3G version and it is not too long after the debut of its primary competitor, the iPad 2.

This price point, if true, would make the WiFi Xoom extremely competitive with the iPad 2. On paper, the Xoom specs are slightly higher than the iPad and its price point could potentially be lower. The Xoom is available with 32 GB of onboard storage may retail for $539, while the same configuration iPad 2 sells for $599. Unless you are die-hard Apple fan, the Xoom is a better value at these prices.

It would be a mistake not to mention that these prices are not confirmed. Motorola CEO Sanjay Jha hinted that the WiFi Xoom would retail for $599, but this $539 undercuts his estimate. While this price may be Motorola’s answer to the iPad 2, it is equally likely that this lower price point may be a Sam’s Club exclusive designed to lure people into the store. Additionally, the signage may not reflect the final price as it may have been chosen for demonstration purposes only. We will just to wait with bated breath for Motorola to announce additional details on the WiFi Xoom. Hopefully, the details are revealed before the iPad 2 launch on March 11th so potential Xoom customers don’t get lured away by the magical iPad.

LG Optimus 2X can multitouch like a champ [HD video]

Oh that Optimus 2X continues to surprise. We've already reviewed the device but playing around with some multitouch apps show...