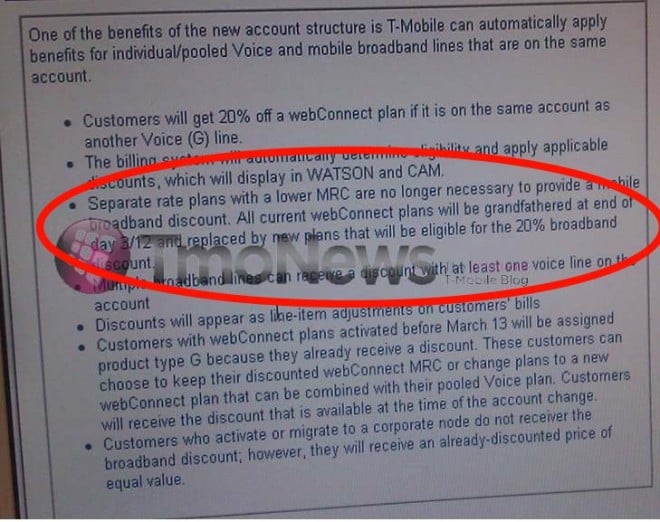 It looks like T-Mobile is preparing to revamp its webConnect mobile broadband pricing, as a leaked document suggests that existing T-Mobile voice subscribers may be eligible for a 20% discount on the mobile web service.

All of the pieces of the puzzle aren’t in place, as the T-Mobile webConnect mobile broadband service is expected to get an overall pricing revamp but we don’t know what that will entail. If you’re not familiar with the service, it’s the mobile data sticks that the fourth-largest carrier sells to get your laptops and computers online.

Of course, you may have to wonder how successful the T-Mobile webConnect mobile broadband plans will be now that mobile hotspot options are becoming common. I know that I’d rather just hotspot my myTouch 4G than plug in a dedicated stick to my laptop.

Still, there are a few reasons you may want to opt for the T-Mobile webConnect mobile broadband and I think your phone’s battery life is one of the largest. Hotspotting absolutely destroys most phones and it can be annoying to have to constantly recharge.

Additionally, the cost of hotspotting may not be palatable for everyone, as the T-Mobile webConnect mobile broadband plans do offer prepaid services that could come in handy if you’re on a vacation, or on a quick business trip. That rumored 20% discount may also help but I’m sure that may only apply to long-term deals.

Finally, the standalone broadband may be faster than most of your phones, as T-Mobile’s 4G network is now getting up to 21 Mbps but only the Samsung Galaxy S 4G is capable of utilizing it. New data sticks should be able to roll out faster than high-end smartphones and that may be enough to convert those on the fence.

We’ll keep our eyes peeled for the official changes to the plans.