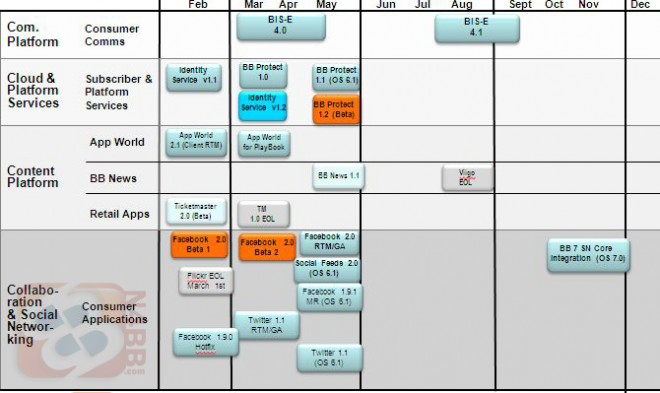 An extensive roadmap for RIM’s software release schedule  for 2011 has leaked out, spanning from the bigger products, like BlackBerry Internet Service, to the smaller ones like Ticketmaster. BIS 4.0 should be rolling out between now and May, with an upgrade to 4.1 starting between late July and early September. No mention of features, unfortunately. The most interesting thing on the calendar, however, is the first sign of BlackBerry OS 7, due to begin “core integration” between October and December.

The Social Feeds app released with OS 6 is due for an update to 2.0 by the end of May when it’s preloaded on OS 6.1. It’ll include more functions available without launching the dedicated social networking app. BlackBerry News will also be taking over the RSS section there instead of being standalone (a move I don’t entirely understand or agree with). BlackBerry News will include support for ads, include new weather and sports content channels, as well as push notifications. There will also be read/unread indicators – a must when you’re sifting through an unending tide of updates from multiple social networks.

RIM also made the Ticketmaster app, which they were planning to get out into beta in February with push notifications of favourite events, on-device purchasing, calendar integration, and geolocation, but that hasn’t happened yet. That should set the tone for any of the dates you see above; things are more likely to get pushed back than not.

The hopeful might have their fingers crossed for QNX making the leap from the BlackBerry PlayBook to smartphones with OS 7, but the guy from RIM I talked to about the transition specifically referenced BlackBerry OS 7 as the stepping stone to QNX on handsets. Based on this roadmap, that would mean we might not see RIM make the jump until 2012, which could be way too long for current BlackBerry users resisting the switch to iPhone or Android.