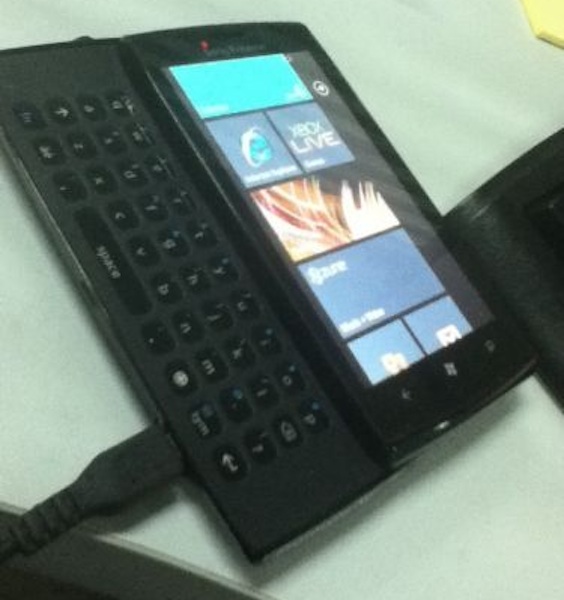 After a morning of rumors, it appears as if that Sony Ericsson Windows Phone 7 handset is not arriving anytime in the near (or distant) future. Earlier today, Mr. Blurrycam made an appearance with a series of photos that supposedly showcased an unreleased Windows phone from SE. The mobile phone was a landscape slider with Windows Phone 7. Besides is Sony Ericsson logo, the cell phone had a blazingly large logo that identified it as a prototype. While the tech news world began to pontificate about the possibility of a SE Windows Phone handset, Eldar Murtazin came in with some news that burst everyone’s bubble.

According to Murtazin, the prototype device was produced by Sony Ericsson and then canceled sometime last year. Pictures of the landscape slider are apparently still kicking around and without a date on the photos, nobody knows how old the photo is. It is just as well as the mobile phone was relatively plain and the Windows Phone operating system is not highly customizable. Sony needs an innovative handset to perk up its lineup, not necessarily another run-of-the-mill offering with Microsoft’s mobile OS. Sony Ericsson would also face a bit of questioning if it adopted its competitors’ Xbox 360 gaming platform at the same time it is trying to launch its own mobile gaming platform based on the PS3. The handset manufacturer also stated last year that it was aiming to be one of the top Android manufacturers, which does not leave a lot of extra resources to spend on another  platform.

This news does not mean that Sony Ericsson has abandoned Microsoft’s mobile operating system. An earlier report out of Digitimes suggested the handset manufacturer was working on a Windows Phone handset. If SE does have a Windows Phone model under development, it is not the QWERTY slider pictured in these leaks. A WP7 mobile phone may also be on the slow track while its Android brethren with PS3 integration are on the fast track. Only time will tell what Sony Ericsson has in mind with Windows Phone 7. Perhaps, the manufacturer may use CTIA to clue us in on some of their plans.

When Nokia decided to use Windows Phone 7 as its primary smartphone platform a few weeks ago, there were many...