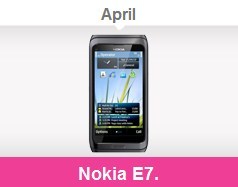 Last time Three UK talked about the Nokia E7, they said the QWERTY-keyboard equipped smartphone will be added to their offering at the beginning of the year. Then Nokia announced the “E7 delay” news and it was only recently that we’ve seen the device hitting select markets’ store shelves. Now we have a new date from the operator – April.

The Nokia E7 got a spot on Three UK’s “Coming Soon” page along with some other highly anticipated products such as the Sony Ericsson XPERIA arc, Sony Ericsson XPERIA PLAY and HTC Desire S. Moreover, in May, Three will be adding Samsung Galaxy S II and HTC Wildfire S, while in June – LG Optimus 3D and HTC ChaCha.

Back to the E7. It’s the best Symbian-powered smartphone made to date, rocking a large 4-inch nHD (350×640 pixels) OLED-based capacitive touchscreen, QWERTY keyboard, HSPA and WiFi connectivity, 8-megapixel camera, 16GB of built-in storage, GPS and so on.

Asus has been super busy recently. During the CES, we've seen the Taiwanese company unveiling few cool tablets and afterwards...