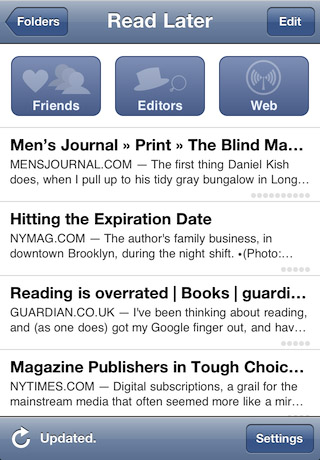 Instapaper, the web service – mobile app combo that allows users to mark stuff from the web and some mobile apps for reading later, updated its iOS app, big time! Version 3.0 is described as the “biggest update Instapaper has ever had in one version,” packing tons of tweaks and new features.

Probably the main new thing of this release is the sharing capability, allowing users to include their friends in the conversation. Supported services include Facebook, Twitter, Tumblr, Pinboard and Evernote and you can set them [services] under “Sharing Accounts” in the app’s Settings panel.

Stars are now Likes, and there’s the ability to read stuff your buddies have “Liked” right from within the app. Similarly, you can “Like” articles left and right and eventually share them across your social circle (Twitter and Facebook).

Then there’s a completely rewritten web browser built in, so you can browse any website, find the articles you want to read later, and save them directly from the app.

Editors browser has been revamped as well and is said to feature the “best human curators on the web” who recommend great articles for Instapaper reading.

If you relied on RSS folders, we’re sad to say you won’t be able to use them anymore. It is said that they were not that popular among the users, hence Instapaper decided to phase them out. The good thing here is that this will reportedly speed-up the whole Instapaper experience.

And there are many other small changes, bug fixes and improvements under the hood… What are you waiting for – click on a link below and take it from there. 😉