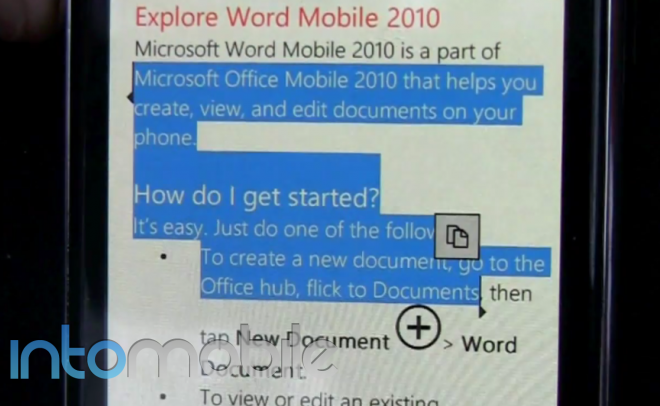 Yes, we’ve heard about the Windows Phone 7 NoDo update for quite a while now and we know that it will bring copy and paste, fast app resuming and other goodies but this exclusive video shows you the first time we see it on a live unit.

Features of Windows Phone 7 NoDo (No Doughnuts – a slight jab at one of the dessert-friendly competitors) have been shown off for a long time, as it was shown off during the actual introduction of the platform last November. There have been some tweaks since that time and it looks like a bit better than when we first saw it.

Unfortunately, we can’t tell you what type of device we shot this Windows Phone 7 NoDo copy and paste video on, as that is an unknown-to-most unit made by one of the largest handset makers in the world. Needless to say, you’ll probably be seeing this soon in some version and it looks like some good hardware – well designed, better specs than we’re accustomed to with this platform and just a nice overall experience once all the bugs are worked out.

As you would expect, the Windows Phone 7 NoDo copy and paste works well – Android and iOS copy and paste requires a contextual menu but the Microsoft version offers a more minimalistic interface. It works well, really.

Unfortunately, some users may feel that the Windows Phone 7 NoDo copy and paste update is coming after a long time of waiting. Yes, the platform just launched four months ago but it has been playing catch-up since launch – the 1.0 version was a solid foundation and great for launching a platform but Microsoft is competing against established platforms that are on the third, fourth or sixth iteration, so it needs to get on track quickly before competitors continue to move ahead.

So, we can expect the Windows Phone 7 NoDo to hit in late March. Check it out, as it also includes quick app resuming. The big update with true multitasking and SkyDrive integration will hit before the year is over (fingers crossed).

Google's Marissa Mayer spoke at the SXSW 2011 conference and she shared some interesting stats on Google Maps for Mobile...