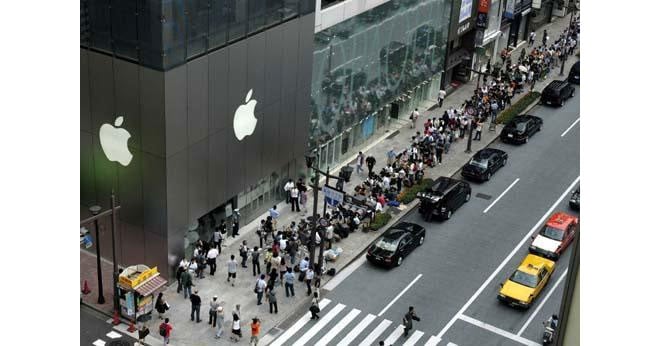 The earthquake and Tsunami that hit Japan last week has captivated the world. The bulk of the news has focused on the destruction and loss of life, but often missed are encouraging stories of people banding together to help one another through this crisis. An email from the manager of an Apple Store in Tokyo retells the amazing story of Apple employees going the extra mile to help others during this time of need.

Like all Tokyo businesses, the Apple Store was open when the 8.9 magnitude earthquake hit. The building swayed and employees helped customers down from the fifth floor to first floor where they gathered safely under the heavy wooden display tables used to showcase Apple’s premium hardware. The store stayed open during the initial earthquake and welcomed customers in during the 118 aftershocks that followed the first tremor.

Older folks used the Macs to follow the news and contact loved ones let let them know they were safe. Younger folks used their iPhones, iPads and iPod touches to Facebook friends, send e-mails or post to Twitter about the historic, yet frightening event. Even some Android users were on hand to use the free WiFi hotspot provided by the Apple Store.

The store employees helped the crowd by bringing out chargers and extension cords so people in the store could stay powered and connected. The store closed at 10 PM and even though employees had already spent seven hours helping Tokyo residents, store workers remained outside the store fixing phones and helping folks connect to the Apple Store WiFi network so they could stay in touch with family and friends. Not suprisingly, FaceTime proved to be incredibly useful as communications tool for iOS users.

Apple also let its employees sleep in the store until they could get safely home and, unbeknownst to most employees, Apple had stocked the refrigerators with food and drink right after the earthquake hit. Employees were also allowed to bring in family members to share the warmth and safety of the store. If an employee decided to leave, Apple agreed to foot the bill for any travel expenses the person incurred while traveling home. The Japanese arm of the Cupertino company also told the manager who crafted the email that his job would be waiting for him if he had to leave temporarily to respond to this disaster.

It is yet another story of corporations, mobile technology, and social networks bringing relief during a catastrophic event. The full email from the Japanese manager is after the break.

Benchmarks show the GPU inside the iPad 2 is ridiculously quick [Not 9x as fast, more like 3x to 7x]

Back in January when we saw a glut of Android 3.0 powered tablets announced at the Consumer Electronics Show, one...