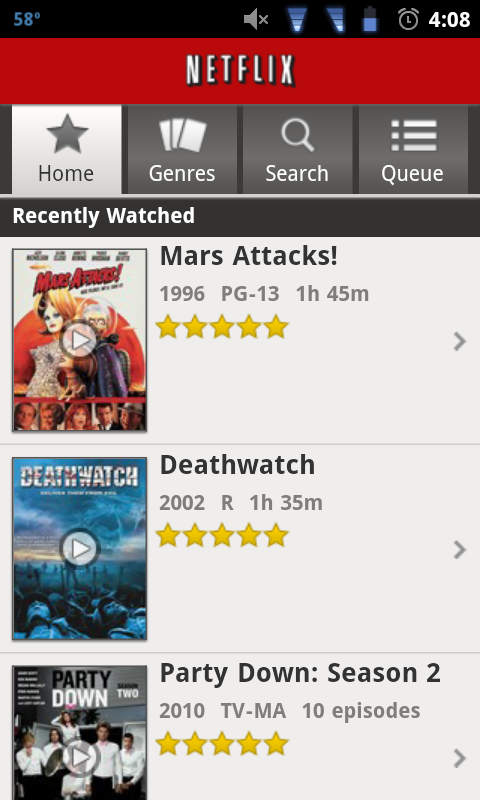 One of the most anticipated applications for Android has just been ripped out of the LG Revolution’s system dump: Netflix. The best part is that you can install it right now on your handset, and that includes the Motorola Xoom!

There’s just one small thing you should know about the app in its current state. It doesn’t work. While you can log in to look at your queue and browse movies, one you try to stream content to your device, it will give you an error and send you back to the log in page. There’s no telling how long it will take before someone figures out how to get the app up and running, but it could possibly be blocked from on Netflix’s end, meaning that it might not be possible to even get working on an unsupported handset.

That said, there should be some hope in there, as we’ve seen some great accomplishments done by Android developers, even if this particular task may be harder than others. It’s also a possibility that the application isn’t completely ready, so we may need to wait until another system dump from the Revolution is found. The likely answer, however, is that Netflix and Qualcomm have partnered up, and are delivering the app to specific devices, and could make it almost impossible to run the application for a phone the application wasn’t intended for.

Hopefully the issues will get ironed out, but it would definitely be a sad day in Android-land if one of the most sought after applications will only be supported on certain devices, which is what it’s looking like at the moment. And if that is the case, maybe there’s a possibility that one can hack the phone itself to make Netflix believe it’s a supported device. This has been done to changed the Android version number on handsets, but I don’t know enough about editing system files to know if an application like this could be tricked to work.

You can hit the Droid-Life link below to download the application.

Motorola Droid 3, Droid X 2, and Targa spotted in the wild

So you thought that Verizon would be slowing their Android lineup now it has the iPhone 4? That doesn't seem...