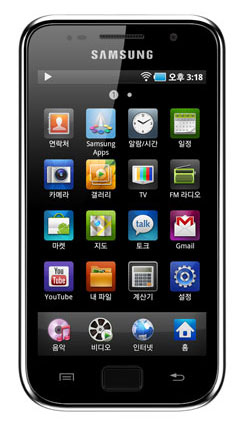 The one unheralded weapon in Apple’s iOS arsenal version Android is the iPod touch. This relatively low-cost media player can hook in tens of millions of users into the iOS app ecosystem and there hasn’t really been a credible Android competitor until now. Samsung said it will be bringing the Android-powered Galaxy Player to the United States.

The Galaxy Player is essentially the Galaxy S without the phone. You still get a 1-GHz processor, 4-inch display, WiFi, GPS, Bluetooth, Android Market support and more. The rear camera will only be 3.2-megapixels and there’s a front-facing camera for photos and videos. There will also be a model with a 5-inch WVGA TFT-LCD screen.

The Galaxy Player personal media devices will come loaded with Android 2.2 and the company promises that it will be upgradable to Android 2.3. There’s no word on when this will be coming though and Samsung’s history with software updates in the United States may make some question how quickly that will come.

The Galaxy Player looks like it will be a solid option for those who want smartphone-like capabilities without the long-term contract. We still don’t know how much these things would cost but I’d imagine we could see these around the $200-$300 mark depending on the size and capacity.

Will this be enough to damage Apple’s iPod touch market share? I think that would be an incredible challenge because Apple absolutely dominates the personal media market thanks to its iTunes ecosystem stranglehold.

The Microsoft Zune HD was arguably a better product than previous iPod touch devices but it never gained much traction. Part of that is the iOS product allowed users to dive into the App Store world and the Microsoft one only had a few, relatively-weak apps. Microsoft has finally put the nail in the coffin on the Zune.

Will the Galaxy Player have the same fate?

Google took longer than usual to update the Android version numbers this month, but they have finally arrived. Even with...