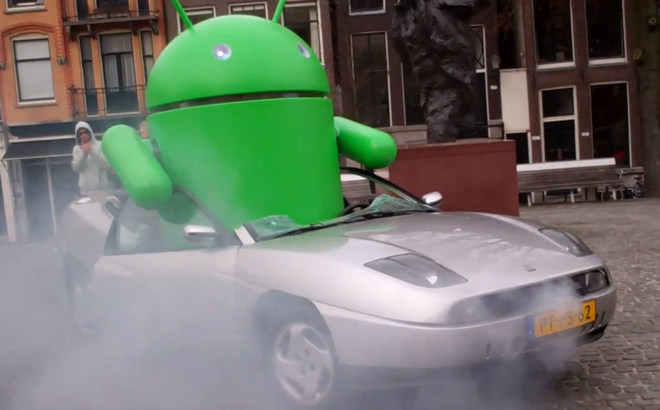 Mobile retailer The Phone House had an interesting marketing stunt in Amsterdam to mark the launch of an Android special going on this week. There’s probably some reason that this particular Android needed to crush this car, but it’s feeling just a little lost in translation. As a part of the event, The Phone House revealed findings from a survey of local demographic data, saying 34% of the Dutch smartphone market used Android handsets, 21% iPhone, 17% Windows Mobile, 16% BlackBerry, and 13% Symbian.

Those numbers are pretty interesting, considering in North America we see a much different picture. You’d expect Symbian to be doing better over there, but it looks like the platform is having trouble maintaining a home turf advantage. It’s a little weird seeing Windows Mobile beating out BlackBerry, even if it’s just by one percentage point. Presuming that stat includes Windows Phone, maybe Microsoft’s October launch went much better over there than it did here.

If you’re in the Netherlands and want to check out some of the Android deals going down this week, take a look at The Phone House’s online store. Here’s a video showing the aftermath; nothing of the demolition in action, unfortunately.

The HTC Thunderbolt will be launching tomorrow, and I know plenty of you are excited. The Android device that we...