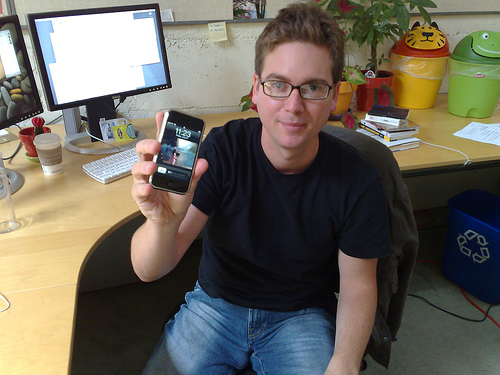 Twitter asked third-party developers recently to stop making new Twitter clients, and instead focus their efforts on building a vertical experience for the social networking service, rather than just emulating it. The initial reaction was a bit of anger, and the general knee-jerk response was that Twitter is just being selfish, controlling and a bit insensitive to those who helped expand its service. While the latter certainly holds true, co-founder Biz Stone decided to clarify things a bit.

Speaking to the BBC, Stone said, “The question for developers is to ask themselves is how they can best serve the users. By another app that pretty much does the same thing as Twitter? Or by creating new and innovative ways to get value out of Twitter that we are not necessarily doing ourselves.”

It certainly does make sense. And we recently learned that third-party app usage was dwindling in favor of official clients for each mobile platform.

Open up the iTunes App Store or Android Market and search for the term “Twitter” and see what comes up. You’ll find dozens of, if not more, applications that virtually let you do the same thing. Some of them incorporate other services like Flickr and Facebook, but for the most part the core is the same: they allow you to read from and post to your Twitter feed.

Stone argues that developers need to move away from creating a fragmented service and into building something more useful. One can look at it as a call for innovation – to do something that benefits Twitter users in ways that the service alone isn’t doing.

I was initially angered by this move, especially coming from the iOS app update that ultimately became known as #dickbar, where Twitter basically slapped you in the face with trending topics and promoted trends/tweets. However, after giving it some thought, I think Twitter is right. Off the top of my head, I can probably name close to 20 individual Twitter apps for iOS, Android and Blackberry alone. Perhaps slimming down those options and building a better user experience and developing new features should be priority.