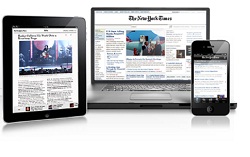 The NY Times has detailed its digital subscription plans and it looks like you’ll be paying a lot if you want to access the news sites through its various apps.

The NY Times subscription plans show that it will cost $35 a month (described as “every four weeks”) to get access to the website, iPhone, Android or BlackBerry app and the iPad app. If you just want website and phone access, it will be $15 for four weeks.

The interesting thing about the NT Times subscription plan is that the iPad and website version will cost $20 every four weeks. Yes, we like the iPad app a lot and think it’s neat but I don’t know if its $20-a-month good.

While the mobile version and the tablet version are different, I don’t really understand the price increase. Yeah, this larger screen on the iPad means you can do a few more things but I don’t get why you have to pay another $15 to get the iPhone app.

The NY Times subscription plans will be one of the first big tests about how much people will pay for news in an era where the Internet and blogging and re-blogging makes many news sites free. A recent survey found that many people like to read local news via apps but very few pay.

Maybe that’s just a pricing thing though, as The Daily just launched on the iPad and it will be flipping the switch on its subscription model soon. Thankfully, this magazine-on-a-tablet is only 99 cents a week or $40 a year.

It’s not outlandish to say that the NY Times offers more content and, probably, higher-quality content but I don’t know if it’s so much better to justify the much higher price. Who knows, maybe I’m just really cheap.

What do you think friends?