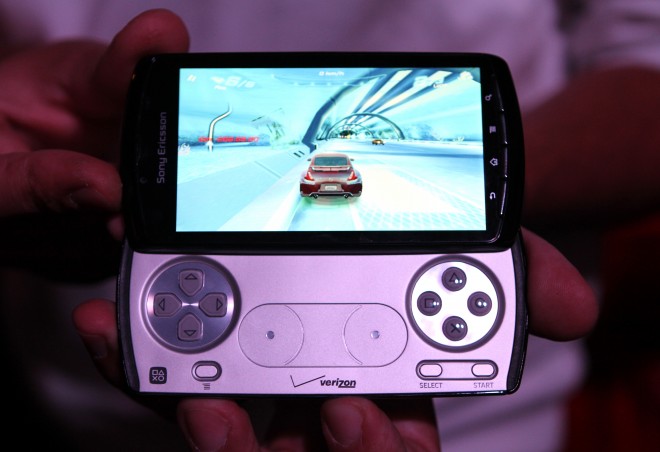 At CTIA Wireless 2011, Verizon started showing off their branded version of the Sony Ericsson Xperia play for the first time.

We’ve already had some hands-on time with the Sony Xperia Play, but the Verizon version is a bit different. It’s coming preloaded with six games: Madden NFL 11, Tetris and The Sims 3 by EA Mobile, Star Battalion and Asphalt 6: Adrenaline by Gameloft, and Bruce Lee Dragon Warrior by Digital Legends. Yeah, you’ll be able to buy Play-optimized games on the Android Market if you want for between $5-$10, but if you get them through Verizon’s VCast service, it’ll be conveniently tacked on to your monthly wireless bill.
If you’re unfamiliar with the specs, the Sony Ericsson Xperia Play packs a 1 GHz processor, runs Android 2.3, has a 5 megapixel camera on the back (plus secondary video conferencing camera on the front), 4-inch 854 x 480 display, Wi-Fi, GPS, 3G, Bluetooth, and unlike the GSM version, the usual Sony Ericsson software customizations, like Timescape, won’t be present. that’s right, pure vanilla Android – apparently because it was in the running as a Nexus candidate next to the Samsung model that eventually won out.

I got to play a few games on it, and using both the accelerometer controls and the touchscreen analog controls required a lot of getting used to, but ergonomically, the controls were very comfortable. I’m still not sure that hardcore gamers would opt for an Xperia Play over a dedicated phone plus a PSP, or that casual gamers would be willing to tack on the bulk of game controls. Although the catalog of Android games built for the Xperia Play will likely grow, those who are already heavily invested in the PSP platform will likely find little reason to switch. Personally, I’m looking forward to the real benefits of always-on connectivity to mobile gaming, since it’s the only real advantage that a mobile phone has over a dedicated portable gaming device like the PSP or Nintendo DS. Latency and coverage will likely create too much of a bottleneck for fast-paced first-person shooters, but turn-based games and MMOs may very well find a home on gaming-centric handsets like the Xperia Play.

Without further ado, here’s a handful of still, plus hands-on video of the Sony Ericsson Xperia Play for Verizon.

Sprint and Kyocera announced the dual-screen Android Echo smartphone last month, and now the manufacturer is launching a developer program...