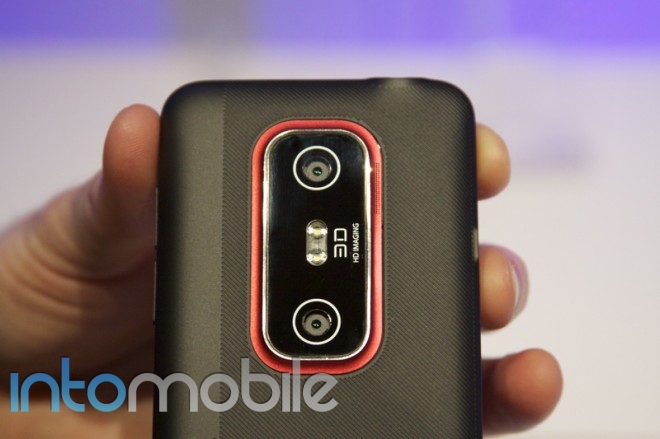 Well, it’s not much of a surprise but Sprint made the HTC EVO 3D official at CTIA 2011 and we got some hands-on time with the smartphone that provides glasses-free 3D and WiMax support.

If you’re familiar with the EVO, the EVO 3D won’t come as much of a shock, as it sports a similar build quality and footprint. It is a bit thinner than the original device though and, of course, it comes with a stereoscopic screen for glasses-free 3D.

You’ll still have a 4.3-inch qHD screen that provides high-quality images and if 3D isn’t you thing, you can turn it off via a slider on the right spine. There’s also a dedicated camera button on that spine and we’re very, very happy about that.

Like the Optimus 3D, the latest EVO features multiple cameras and flashes on the back in order to record videos and still pictures in 3D. You’ll be able to view those without glasses on the device and the HDMI port means you can stream it out to a larger television.

Inside the EVO 3D lies the first dual-core 1.2 GHz SnapDragon processor and this includes something called asynchronous processing. This means that each core can operate independently and this could lead so some better battery life. That could be important because this uses 4G WiMax and all next-generation mobile data networks can cause some extra pull on the battery.

We’ll soon be up to our eyeballs with phones that provide content which jumps out of the screen, as AT&T just announced the Thrill 4G, which also has a glasses-free 3D screen. Look for this latest EVO to hit in the summer and we’re not sure about pricing yet.

Sprint took to the stage at CTIA and announced the EVO 3D, the next generation in its line of popular...