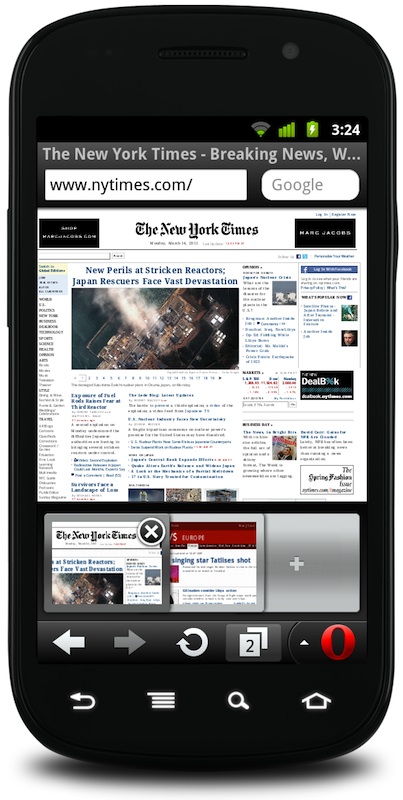 After promising to launch new versions of both Opera Mini and Opera Mobile at CTIA last week, we’re happy to say that the Norwegians have kept their word. While the user interface hasn’t changed with Opera Mini, performance has gone up. Scrolling and panning speeds have improved considerably since version 5, and there’s also now a dedicated share button so you can send off a website you’re viewing to Twitter, Facebook, vKontakte (Russian social network), or My Opera. Over on the Opera Mobile side there’s now pinch to zoom, a refreshed UI, and it even supports tablets. Opera Mini 6 is available as a native application for Android, BlackBerry and Symbian smartphones, and of course there’s a Java version for all the feature phones out there; Opera Mobile 11 is available for Android, Symbian, Windows 7 desktop (beta), MeeGo (beta) and Maemo (beta).

We’re big fans of Opera’s software here at IntoMobile. Their ability to take a website you want to read, compress it by up to 90% using servers located who knows where, and then finally spitting it back down to your mobile handset has given feature phone owners all over the world access to the rich assortment of content out there on the web. Also, if you’re on a network that either has a really slow connection or one where data is expensive, Mini helps solve both those problems. Useful if you like to take summer holiday out in a cabin in the middle of nowhere.

Two notable omissions: No updated Opera Mini for the iPhone, and no update for Windows Mobile. The iPhone version may or may not be pending approval, but the Windows Mobile version … maybe it’s about time that died? People need to upgrade their device at some point, and there’s little to no reason a consumer should still be rocking Windows Mobile.