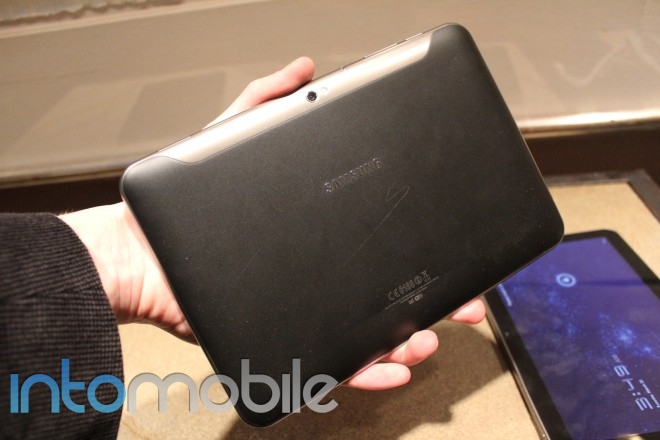 We’re live from CTIA 2011 in muggy Orlando and you just know we had to get our hands on the latest hardware. Samsung just announced the Galaxy Tab 8.9 and we took the tweener tablet for a spin.

As the name suggests, the Galaxy Tab 8.9 features an 8.9-inch display. It’s essentially the same device as the Galaxy Tab 10.1 that we saw introduced last month at Mobile World Congress but with a smaller screen (Update: Sorry if I wasn’t clear before, the Tab 10.1 has been redesigned since MWC to be thinner and lighter and the camera was downgraded). You’re still getting the dual-core processor, 1280 x 800 resolution, 3-megapixel rear camera, front-facing camera, WiFi, GPS, 3G support and it will probably land with some form of 4G in the United States.

The Galaxy Tab 8.9 is aiming for a niche audience, as those who want real portability may opt for the 7-inch version and those home tablet users may as well get the larger-screen version because the price difference will be negligible. Still, you can hold this one in one hand relatively comfortably. The Galaxy Tab 8.9 you see below is actually a prototype version, as the final version will be thinner and even lighter (Update: We swapped out the prototype shots for pics of what should be near-final).

Just as interesting, the Galaxy Tab 8.9 (and the rest of the line) will run Android 3.0 with Samsung’s TouchWiz UX. This is the first time we’ve seen Honeycomb with a custom skin and don’t worry pure Android fans, this skin doesn’t monkey too much with the tablet-optimized version of Android.

The TouchWiz UI for Android adds some live tiles to the home page and the notification bar in the bottom right corner now has toggles for things like GPS and WiFi. You can also swipe up from the bottom to reveal a tray of apps which are customizable. Like the Motorola Xoom, you can get quick access to your apps and customize your homescreen by hitting the icons on the top right.

Check out our photos and video of the latest Samsung tablet.

The Android mascot has been known to be quite the wild one. He doesn't play by the rules as he's...