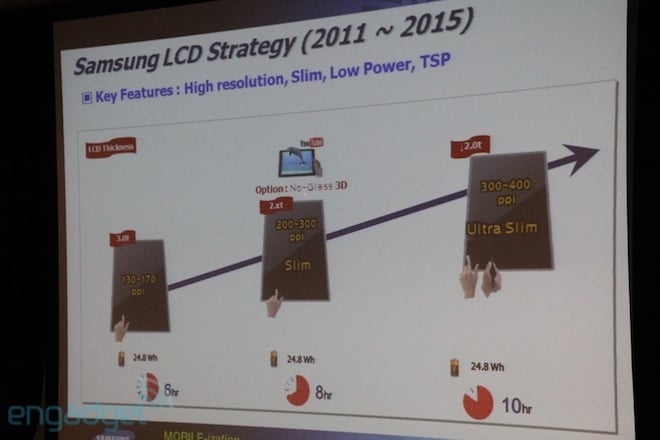 When Apple announced the iPad 2 many were disappointed that the screen’s resolution stayed the same. The rumor mill was hoping that Apple would double the vertical and horizontal resolution, effectively quadrupling the number of pixels, in much the same way that they did when they went from the iPhone 3GS to the iPhone 4. Here’s some numbers: the iPhone 3GS, with the old 320 x 480 pixel resolution screen, has 163 pixels per inch. You could see some aliasing on fonts, and while for the time it was impressive, things changed when the summer of 2010 rolled around. The iPhone 4 has a resolution of 640 x 960 pixels in the same 3.5 inch package, which means 326 pixels per inch. The iPhone’s screen is easily one of the best reasons to own the device, but when are we going to see such pixel densities come to tablets?

At the Samsung Display Strategy 2011 event the South Korean firm talked about what it sees as the future of their industry. They predict that over the next 4 years there are going to be 2 new generations of screens for tablets. The next immediate generation should see panels hitting a pixel per inch between 200 and 300 and providing up to 8 hours of battery life when used with a 24.8 Wh battery. The generation after that should see 300 to 400 pixel per inch displays with 10 hours from the same battery. Samsung says that in 2010 over 1.9 billion displays, including phones, tablets, anything with a screen really, shipped. That number is expect to hit 2.4 billion in 2013 and 3 out of 10 of those displays are going to go inside a smartphone. It’s no wonder they’ve been pouring billions into an OLED factory that’s scheduled to open this summer.

If we had to take a guess, we’d say the iPad 4 is going to get the resolution bump. Frankly, we want the same pixel densities in our laptop screens first.

Today Sprint announced the next generation of the EVO line, and the HTC EVO 3D is all sorts of sexy....