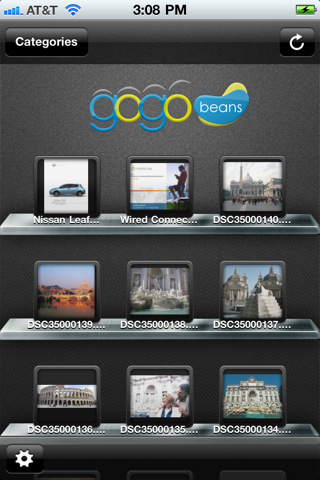 One new app to launch at CTIA 2011 was Gogobeans, which at first blush looks an awful lot like Bump. Basically, you have a locker of content (called beans) stored in a cloud, and so long as you and your friend are running either the iPhone or upcoming Android app, you can share file access (called bouncing) simply by shaking your phone. Once a file is shared, your friend will have access to it in the cloud for as long as you allow – it’s not just a one-way file transfer. The primary difference with Bump is that location isn’t an issue, so you can shake-to-share from across the room, or across the country. Although you can load up all sorts of content to your account from a computer, right now the iPhone version of Gogobeans will only transfer pictures and contacts, with more on the way.

The one caveat I see right now is that both parties need the app open, but the iPhone app will include push notifications in the future, so you can see incoming sharing requests even if Gogobeans isn’t running. The Android app is still in the works, but should be coming out shortly. Pricing is free to start, but if you need a lot of cloud storage, premium packages will be available. BlackBerry and Windows Phone apps are in the works, but won’t be around until later this year.

Here’s a quick video showing it in action, and if you want to give it a shot, you can download the iOS app below for free. ‘

Looks like Sony Ericsson was inspired to do some good with their first Android phone, the Xperia X10. The handset...