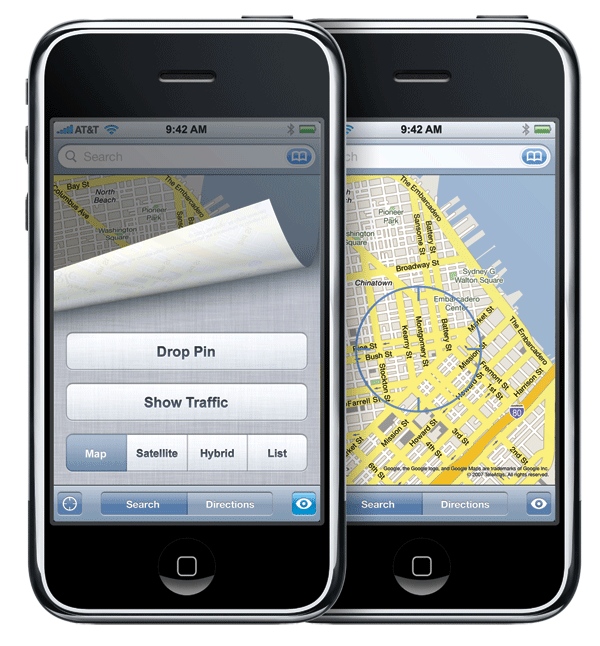 When Nokia’s flagship N95 began shipping in the spring of 2007 it was first flagship device to ship from a major phone manufacturer with GPS built in. Since then the race to bundle GPS inside mid to high end mobile phones has come to an end, and it’s damn near impossible to buy a smartphone today that doesn’t have the ability to show you where you are on the planet with an accuracy of a few meters. The real battle is now centered around who can write the best software that can take advantage of the ubiquity of GPS devices on the market. Apple fanbois don’t want to admit it, but when it comes to maps nothing comes to close to Google Maps for Android. The folks at Cupertino know this and they’re looking for a pair of developers to “radically improve how people interact with maps and location-based services“. Those words have since been removed from the previously mentioned job listings, but it’s got us thinking. Now that Google and Apple are ferociously competing with each other, why hasn’t Apple bothered to come up with their own maps application? They’ve got the designers, they’ve got the developers, now they just need to ship, but is that going to be enough?

Services are hard, and Apple’s track record isn’t exactly paved in gold. They’re experts at hardware, and while their software can be a bit limiting for some, it’s more than adequate, some say even perfect, for the masses. Then you look at MobileMe and the bloat that is iTunes and you start to wonder if Apple could pull off making a maps application that also has a service element that can let you find your other iPhone carrying friends and checkin to venues similar to how Foursquare works today. Will they pull it off? Can Apple win at the cloud?

iOS 5 coming in the fall; WWDC will be all about the cloud

The earlier rumor was that Apple may unveil the iOS 5 and MobileMe at some point in early April. Now...