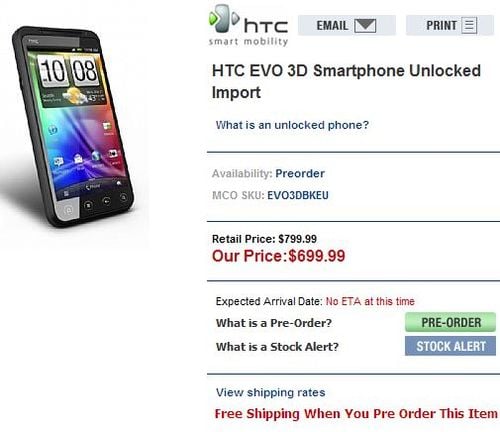 Before you visit the site and spend your hard earned money in a flash of a second, let me tell you one thing. It is true that the GSM-based version of the HTC Evo 3D has been caught in the wild, but at the moment no one knows when it will be launched. In that sense, do you really want to commit $700 bucks only to get the phone few months later?

MobileCityOnline is the company that offers the Evo 3D, which should sing along pretty much any European network. Unfortunately, that doesn’t include AT&T or T-Mobile, the two major GSM operators in the U.S. that use different frequencies for their respective 3G networks.

If bragging rights are worth 7 hundred bucks, go for it. Otherwise, wait a bit and see if your carrier manages to grab HTC’s first 3D-enabled Android smartphone. I’m sure the Taiwanese company wants to have it as widely available as humanly possible and in that sense I wouldn’t be surprised they announce the Desire 3D in the next couple of week — that’s me speculating on the name of the upcoming HTC phone…

To all of the Canadian readers out there, you may (or may not) recall my post on the Motorola XOOM...