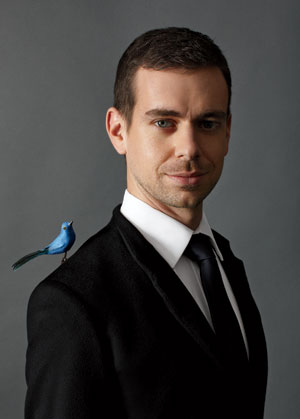 Jack Dorsey felt in October 2008 what Steve Jobs must have felt when he was pushed out of his own company. Dorsey stepped down as Twitter’s CEO to become chairman, and co-founder Evan Williams took his place. The move must have caused some turmoil amongst the co-founders: in Vanity Fair’s profile of Dorsey, the relationship between the himself and Williams was described as relatively curt:

Williams and the board pushed him out within two years. And although Dorsey remains chairman of the company, he was out the door by the time Twitter had become a cultural force. What’s more, Dorsey and Williams, to this day, rarely speak to each other beyond occasional exchanges at board meetings.

But like Steve Jobs, Dorsey is also learning what it feels like to come back. And this time around, judging by all the noise on Twitter, the company and social networking service that was his brainchild, it seems users are excited to have him back.

Dorsey, or @jack as he’s referred to on Twitter, is equally excited to be back. He says on his personal Twitter account, “Today I’m thrilled to get back to work at @Twitter leading product as Executive Chairman. And yes: leading @Square forevermore as CEO. #200%.”

Many are hopeful of the changes and contributions that he’ll be bringing back to Twitter. One can’t imagine that with Dorsey’s design philosophy, the Twitter for iPhone Quickbar, or #dickbar as it’s referred to, will stay. In fact, some users were tweeting at Dorsey to make that happen.

The big news is that he’ll also be staying on board at Square as its CEO, which makes perfect sense. Dorsey has a great vision for the future of commerce and simplifying payments for businesses, small merchants, consumer-to-consumer, in taxis and airports and everywhere else. The man takes Square’s philosophy and design very seriously – an approach that Twitter could have used the past few months during his absence.

So now he’s back. The rumors that the social networking service was in talks to bring him back were true, and we’re glad he is.

MeMap is a new iOS application that allows Facebook users to see which friends are around and what they're up...