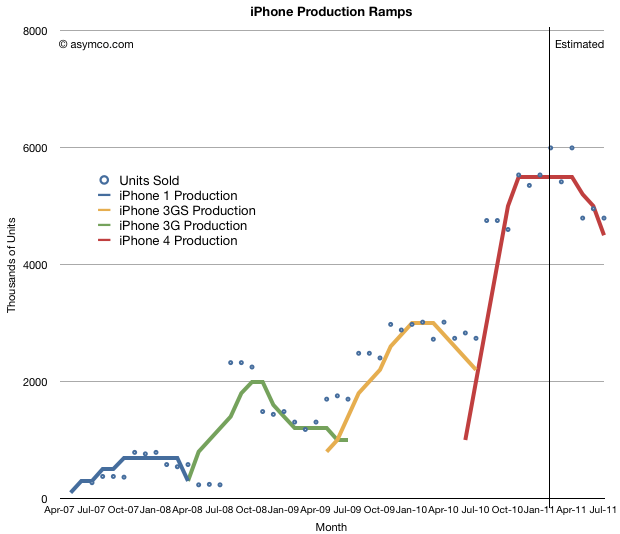 The Apple iPhone has been a massive success, as this smartphone kicked off the mobile revolution we’re seeing today and the iconic device has sold over 100 million units through its four iterations. At least one company believes that the upcoming iPhone 5 could sell 100 million units on its own.

The chart above comes from Asymco and it says that each new Apple smartphone model essentially doubles production (and sales) of the previous model. Using this assumption, it shows that the iPhone 5 would account for at least 100 million units before it is replaced by the next model. This would also give Apple about 20% of the global smartphone marketplace.

Now, this is based on many assumptions, so I don’t know how much credence you want to put behind this. Apple’s best iPhone quarter has been about 16 million units and it has been struggling to create more per quarter even though there is demand. It should be able to ramp up but getting to 25 million devices per quarter could be tough, even for Apple.

The other assumption is that the demand curve will continue to grow despite the growing competition from Android, webOS and others. Heck, IDC is even predicting that the Windows Phone 7 platform will have larger market share than the iPhone in a few years.

I have been proven wrong so many times over the years and many of those instances have been doubting Apple and its iLineup. I thought the iPhone would be a moderate hit and that the iPad was just a blown-up iPod touch. Wrong on both counts, kiddo.

100 million units is a staggering figure to get to, even if you spread it out over the course of a year. I don’t think Apple will hit that with the iPhone 5 but with the growth in the overall, global smartphone market, I could see the next model getting there.