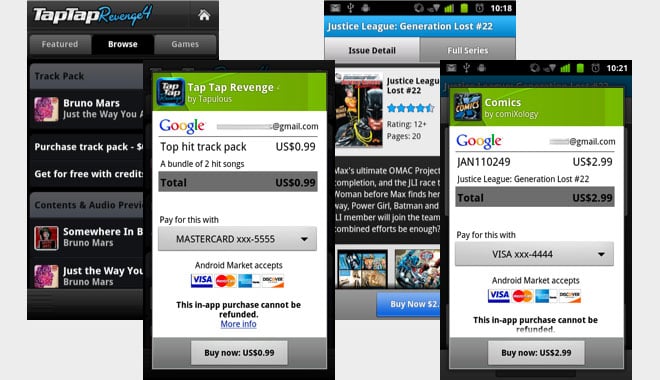 In-app billing is now available for Android developers! Google announced on its developers blog that it is making available its in-app billing service for Android devices, an arrival that is a few days earlier than expected. This highly anticipated feature will let users make purchases within applications and bring Android on par with iOS. It is also a new way for developers to monetize apps. Instead of adding advertisements or selling an application with a high purchase price, developers can add value-added content within an application and entice users to make purchases.

If you are user and want to test out the feature, several developers including Disney Mobile, ComiXology, Glu Mobile and  Trendy Entertainment were given early access to in-app billing. This group has already updated select apps to support this new feature. These specially chosen applications include the popular Tap Tap Revenge, Comics, Gun Bros, Deer Hunter Challenge HD, WSOP3, and Dungeon Defenders: FW Deluxe.

If you are developer, what are you waiting for? Point your browser to Google’s Android development website where you can download sample code, read through the documentation, and begin to work this new revenue stream into your application. Happy coding!

It was only a matter of time before the music labels raised a stink about the Amazon Cloud Player, as...