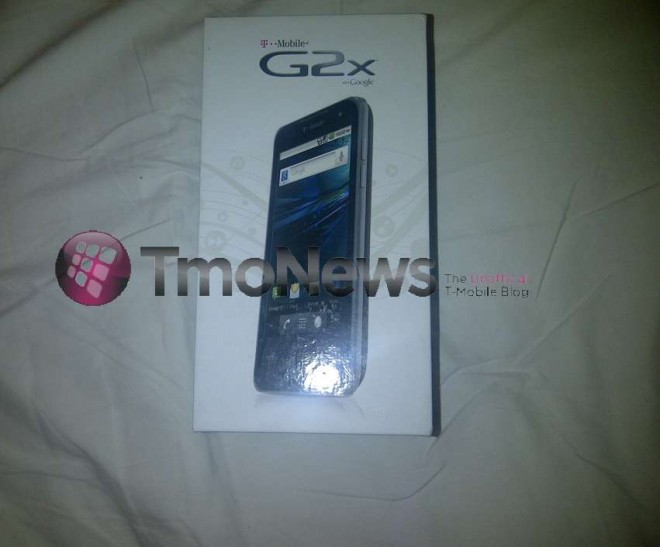 T-Mobile’s next flagship phone will be coming to us in the form of the G2x, which is essentially the LG Optimus 2X under Magenta’s branding. We may not know exactly when the powerful handset will hit shelves, but that hasn’t stopped the retail packaging from popping up on the interwebs.

We know there’s little to say about a box, but seeing it already in the wild could lend well to the April 20th release date rumor we heard some time ago. Then again, that’s all speculation. The box itself looks similar to the G2 packaging, in that it’s kept pretty minimal. Of course, we’d rather see the phone that’s hiding in said box. This will have to do for now.

The T-Mobile G2x is a nice upgrade to its QWERTY keyboard-toting cousin. The G2x sports NVIDIA’s Tegra 2 CPU, 8 megapixel camera on back, and 1.3 front-facing camera, which may be enough to consider upgrading for some people. Not only that, the handset looks to support AT&T’s 3G bands, and if that is confirmed, the G2x won’t become obsolete when the acquisition takes place next year. Those looking to upgrade from the G2, but still need a physical keyboard, can turn their attention to the Sidekick 4G, also to be released on the 20th of this month.

If you’re looking for a high-end handset on T-Mobile, then the G2x is really where it’s at. This summer may bring more powerful alternatives, like the HTC Pyramid, but I’d personally still go with the G2x.Whatever your tastes are, T-Mobile’s upcoming lineup doesn’t look like it will disappoint. Whether you want to keep it simple with stock Android, or prefer the sexier HTC Sense on your phone, T-Mobile will be offering both in two powerful packages.

If you can’t get enough of the G2x, why don’t you take a look at our Optimus 2X review (which is basically the international version of the G2x) to get a good idea of what to expect from the upcoming handset.

The most frequently updated Google-made application for Android is, without a doubt, Google Maps. The Android app has recently received...