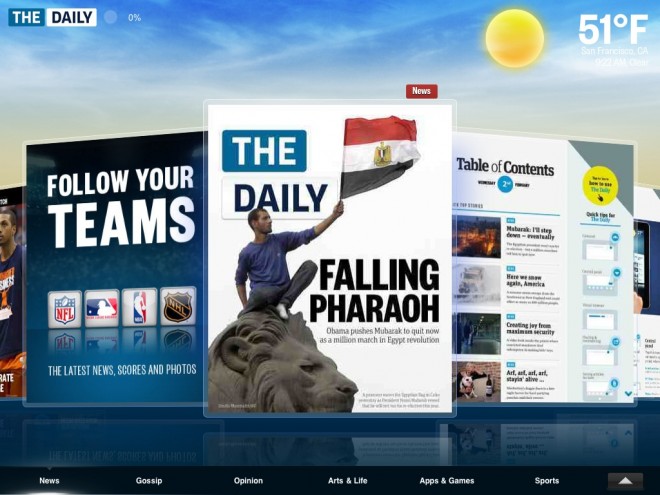 The Daily iPad newspaper app is an attempt by News Corp to bring publications to the tablet age but how is the subscription service doing? Well, it’s too soon to make a final judgement but the early returns don’t look that great.

On Forbes, an author speculates that The Daily iPad newspaper was downloaded 500,000 times during its free trial period. He also says that there are 75,000 “regular users” – no word on if this means these are daily users or just daily users during the free period.

Jeff Jarvis points out that The Daily iPad newspaper has already cost $30 million to create and will cost about $55 million for its first year. Using crude math at the 99 cent per week figure, that means this publication will have to attract at least 750,000 users to break even when you factor in that Apple takes a 30% cut.

We should note that this doesn’t take into account advertisement revenues. While Jarvis says that most advertisers don’t sniff publications until they reach at least 3 million users, this type of audience may be more appealing because of its demographic and disposable income.

I haven’t picked up The Daily iPad newspaper since it first launched because I found it to be quite buggy, even if the content was solid. It was so buggy that News Corp told users to delete the app and download a new one once it released a refreshed version.

I do like the idea of this product though and think it’s a bold move for News Corp. We can look forward to The Daily to hit other tablets in the future but it seems to be sticking with the iPad for the foreseeable future.

What do you think about tablet newspapers and magazines? Are these the wave of the future or just trying to cram an old model on a new format?

Running CyanogenMod 7 on your phone and want to give it more of a Honeycomb look? If you said yes...