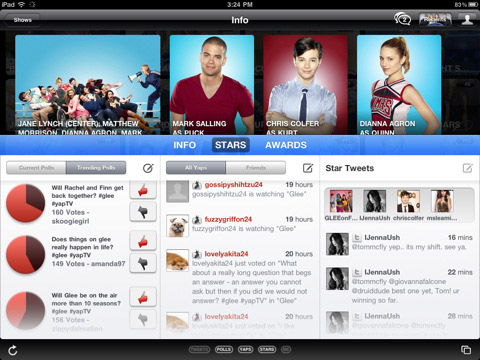 We haven’t talked about the social TV guide app, yap.TV, when it was initially released for the iPad. Now that it has been updated, we decided to give it some space on IntoMobile.

First what’s super-interesting about it is that Steve Wozniak helped make for a better experience, providing its advice to the yap.TV folks.

The main idea behind yap.TV (and other social TV guide apps for that matter) is to act like a second-screen companion, allowing like-minded viewers to comment on the show. For instance, let’s say you’re watching the latest episode of American Idol – start yap.TV and see what everyone else thinks of the finalists.

Of course, such an experience can also spoil finals for some folks, thus the service has a system to filter tweets by time zone to try and stop this.

yap.TV has its own account management facility, but there’s also an option to link it to your existing Facebook and/or Twitter accounts. Once you’ve signed-up, the application presents you with 4 tabs: TV grid, favorites, friends and trends.

You can browse TV shows and learn about each one of them. Moreover, you can become a fan of the show (to access it later via favorites), make or take part in polls, watch for latest tweets, and organize private (chat) parties around shows. Heck for some shows you can even access to series stars’ tweets, which is cool.

Friending other people is also possible so you can check what they’re watching at any given moment and eventually interact with them either during the show or at some other point.

The iPad version is made to take advantage of the bigger screen, which is very useful for rearranging all of the streams…

‘nough said. yap.TV is available as a free download and you can grab it from a link below.

Glu Mobile, which these days calls its self a publisher of 3D social mobile games, launched Big Time Gangsta App...