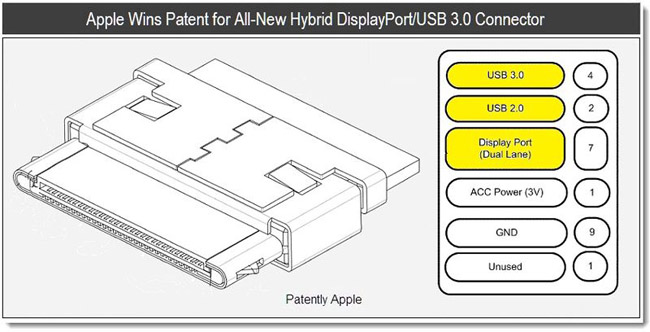 The US Patent and Trademark Office granted a patent for a new type of dock connector to Apple. It is a slim hybrid DisplayPort/USB 3.0 high speed connector which will most likely be used in the upcoming iOS devices.

Apple has recently introduced another high-speed connector called Thunderbolt (originally codenamed Light Peak) which comes with the latest MacBook Pros and it’s safe to bet all future Mac computers will come with the same port, as well. In that sense, the patent suggests that upcoming iOS devices may have come with a Thunderbolt port since DisplayPort and Thunderbolt connections are physically similar.

Finally, while Apple (and other companies for that matter) file patents for technologies that may never see the light of day, PatentlyApple speculates that this new dock connector could be an exception. As a matter of fact, the “Apple patents watchdog” thinks we’re talking about the technology that could be unveiled later this year or in 2012 when Apple adds USB 3.0 ports to their Mac computers…

Witness is a new application for Mac with a mobile (iPhone) component. The $40 app effectively turns your Mac into...