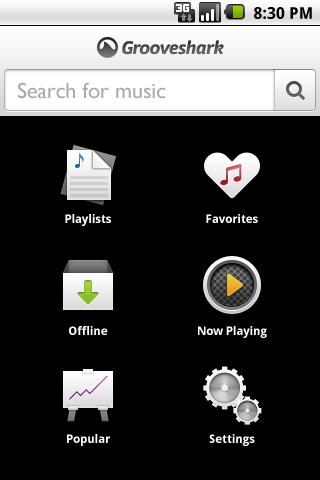 A popular mobile music app, Grooveshark, has been removed from the Android Market for violating developer terms of service. It’s likely to have something to do with copyright infringement since Grooveshark operates by allowing users to upload music to the communal database for others to play on demand. Apple kicked Grooveshark from the iPhone App Store a long time ago on the same grounds, which now leaves webOS as the only major mobile platform still officially supporting the service. The developer said on their Facebook page that they are “investigating alternative methods for distributing the application”, which likely means they’ll be offering a direct download of the app, much like they do for the BlackBerry version.

The service is free to use in the browser so long as you can stomach a few ads, but if you want to go mobile, you’ll need to pay $9/month, or get in on promotions like a year of service for donating $20 to Japan relief. Grooveshark Mobile allows you to pull up any song they have on demand over 3G or Wi-Fi, cache tunes locally for offline access, build playlists, mark favourites, and see what your friends are listening to. Hit up Grooveshark’s front page to give the desktop version a shot – it’s pretty awesome, I gotta say.

It’s too bad that Grooveshark is having such a hard time getting the blessing of platform managers, but for most mobile OSes, it’s easy enough to work around that roadblock. The bigger problem will be making nice with the record labels which no doubt put pressure on the likes of Google to remove anything offending their intellectual property. What do you guys think: are record labels right to try to block the Android app altogether, or should they simply be making DMCA demands to remove individual tracks/albums/artists from the service?

HTC Pyramid to launch April 12th as the UK-based Sensation?

HTC is rumored to be holding a UK press event to announce the HTC Pyramid on April 12th. New information...