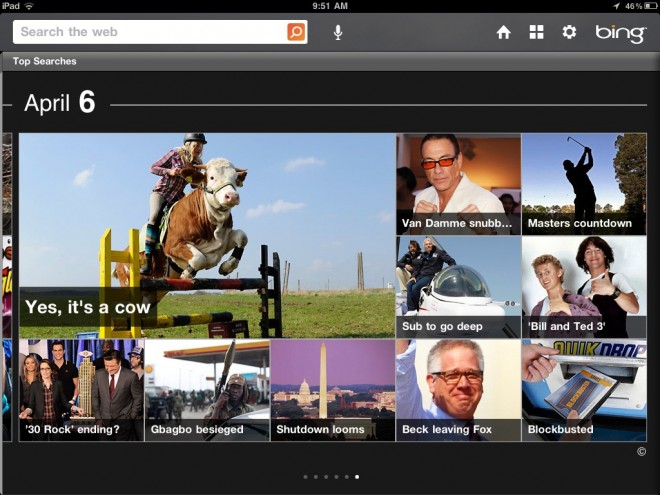 Microsoft isn’t shying away from Apple’s products, as it has just released a Bing iPad app and this program is actually pretty darn cool.

The Bing iPad app is similar to the iPhone version but it has been optimized for the larger screen. As you would expect, you can quickly do searches from the top bar and it does a solid job of auto-populating results and suggesting queries. You can also do voice searches thanks to the TellMe technology that’s built in.

The Bing iPad app also comes with multiple categories on the bottom for things like Weather, News, Movies and Trends. Each of these has a neat interface that looks great on the tablet and there’s a cool interaction metaphor for jumping between your tabs – simply drag the corner of the window you’re in to go back to a previous window. I’ll have a video up soon which will show you how intuitive this is.

The interesting thing about the Bing iPad app is that it includes a Trends category which gives you the top 10 stories of the day in a pleasing interface. This is a great way to keep up with the zeitgeist of the Internet on the go.

There’s also a Movies category that is almost as good as the Fandango app. It gives you access to reviews, nearby showtimes and trailers but it doesn’t quite have the same visual pizazz as the Fandango one.

The Bing iPad app also has the mapping features you’d expect and it’s similar to what we’ve seen with Windows Phone 7 because you can find nearby locations and get directions to it. I look for Thai restaurants near me and it found most of them but I was surprised that it didn’t bring up a few places down the street that I know can be found on Google.

Regardless, this is a cool app from Microsoft and it’s free, so go ahead and check it out (iTunes link).