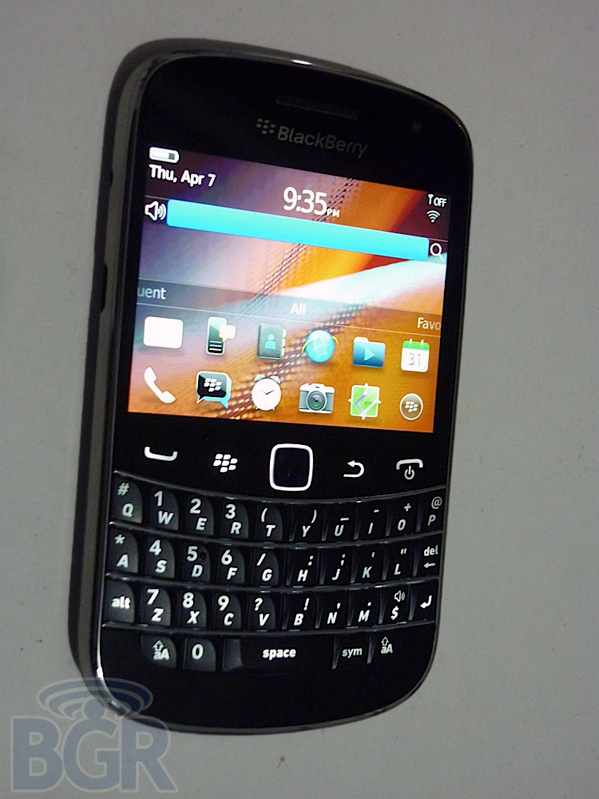 We got a glimpse of the BlackBerry Touch (code-named Monaco or Monza) a few days ago, and now some shots of another upcoming BlackBerry, the Bold Touch (a.k.a. Montana/Dakota), have surfaced. There’s not much more to say that we haven’t seen in those leaked tutorial videos, but the back of the device is still showing the name Brand, which I thought was just a placeholder for the real market name in renderings. It looks to be carried over onto a real live unit; what do you guys think of “BlackBerry Brand”? Is that a name you can get behind? Who knows, it could still simply be a placeholder. Aside from that, a comparison shot next to an iPhone 4 shows the Bold Touch is only a few millimeters chubbier. Another picture shows the Mobile Hotspot Mode option, which is a new addition for OS 6.1 and what looks like most BlackBerry handsets going forward.

From what we’ve seen in previous leaks, we’re expecting the BlackBerry Bold Touch to have a 1.2 GHz processor, 768 MB of RAM, 8 GB of internal storage plus microSD memory card up to 32 GB, a 2.8-inch 640 x 480 touchscreen, a 5 megapixel camera with HD video recording, Wi-Fi b/g/n, and support for augmented reality apps and NFC contactless payments.

According to the source of this leak, an announcement is expected at BlackBerry World next month, with a proper release ready for June or July. It might look like the same ol’ BlackBerry, but the improved software, screen, processor, and RAM are all welcome additions, plus near-field communications and a magnetic compass should be enough to keep the spec sheet modern for the foreseeable future. What do you guys think – will this be a satisfactory stopgap until RIM gets the PlayBook’s QNX operating system onto smartphones?

The Bank of Montreal is putting the finishing touches on the mobile apps for BlackBerry and iPhone, which should be...