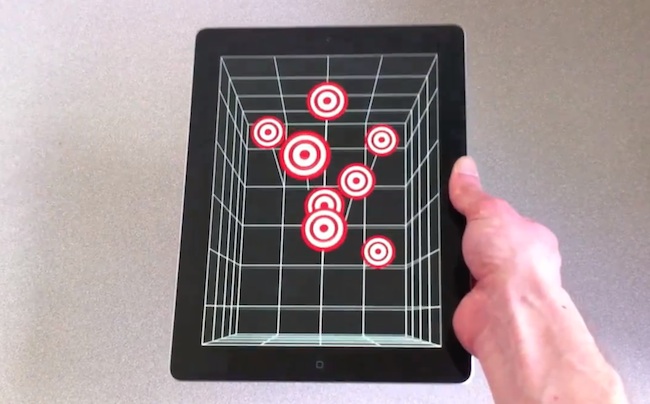 Jeremie Francone and Laurence Nigay from the Laboratory of Informatics of Grenoble, France have figured out how to use the front facing camera on Apple’s latest iPad for something other than awkward video chats and narcissistic photo sharing. They’ve built software that will track the position of your head and then adjust the contents on the screen accordingly as to create an illusion of a third dimension. Now granted, this can’t really be called 3D since the 3D displays that are out today don’t need to be tilted in different directions to get the required headache inducing 3D effect, nor are you tasked with running around your living room to see different perspectives that you might have otherwise missed if you opted to simply rot away on your sofa while watching “Wheel of Fortune”. Similar work has been done with the Nintendo Wii, since the console knows where the exact position and angle of the wireless controller is at any given moment, and also with the XBOX 360, since said console supports an accessory dubbed “Kinect” that will track your body as you flail your arms in front of your television in order to score more points at a mini game that loses its appeal after 5 minutes.

Now for the important question, how long until we see this technology actually used in an application worthy of coughing up $0.99 to download? It’s too soon to tell, but since this research is being done at a laboratory then there’s hope that they’ll discuss how they achieved what you see in the video above in such a manner that it’ll be easy for anyone to start making their own 3D apps. Are you looking forward to seeing a glut of articles from mainstream media about how the iPad 2 is bringing the third dimension to your already magical tablet?

Developer James Laird took apart an AirPort express, dumped the ROM and reverse engineered the AirPlay private key from the...