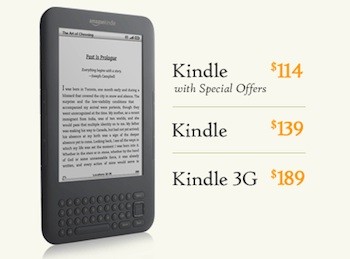 As part of its plans to dominate the e-book market and to enter other markets, Amazon launched an ad-supported version of its Kindle reader, making it available for $114. No need to panic, your reading won’t be interfered with ads — rather the online retailer will serve advertisements only on the Kindle home screen and screensavers.

I mind the price, considering that the ad-free version is only $25 more expensive. Not that I would be bothered with home screen ads or those appearing when the device is not used for reading – it’s just that I would expect Amazon to more heavily subsidize Kindle and eventually hit the $99 price point. That’s definitely a much better psychological buy-in point, but I guess they just started and are still experimenting to see how their customers will react.

In the meantime, I’m sure both Google and Apple will try to include the ebook reading space into their ad efforts. We’ll definitely be watching where this goes and let you know as soon as we hear something new. Stay tuned…

If everything goes as planned we'll have more (if not all) details about the HTC Sensation aka Pyramid later in...