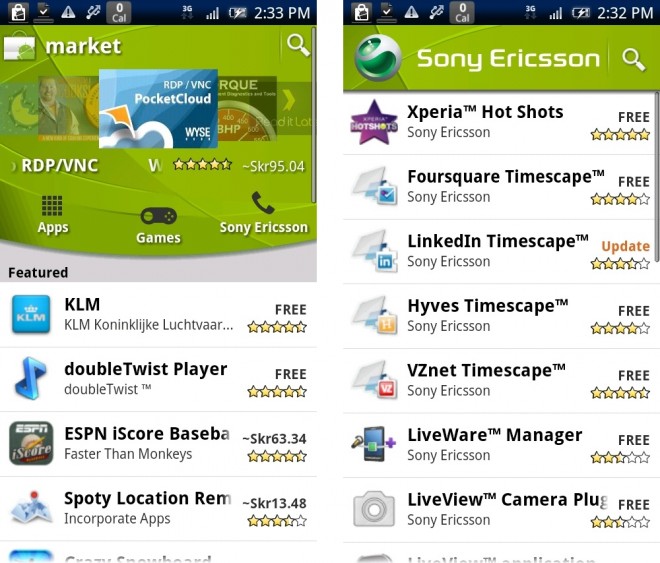 Today, Sony Ericsson announced a new dedicated channel in the Android Market where they can show off apps they’ve made as well as promote apps from partners. As you can see, some signature Sony Ericsson apps like Timescape plugins and LiveView apps are going to be found in the channel, but SE says we’ll also see some exclusive game offers there too. The channel will be pushed out on a carrier-by-carrier basis, but odds are good that if you have a Sony Ericsson Android phone, you’ll be seeing this channel pop up soon.

I’m a fan of this move because it’s not quite as awkward as trying to launch a completely separate app store from scratch, but still offers a place where manufacturer-built apps can be highlighted and accessed. This will also be a good place to find games you know will be built to take advantage of the Xperia Play‘s hardware controls. LiveView, Sony Ericsson’s watch accessory which displays phone information on a tiny 1.3-inch screen, offers some unique software possibilities and as such really needs a channel like this where supporting apps can be easily found.

I’m curious if other manufacturers will start offering their own similar channels now that Sony Ericsson has set a precedent. It looks better than fishing around for one official app, then hitting the link for “More from this developer”, in any case.  The variety of software customizations that Android handsets are subject to can be a little boggling at times, and having them all condensed into a familiar user interface would be a welcome sight, especially for noobies still coming to grips with the idea of downloading apps.

Back in January, Eye-Fi, creators of a Wi-Fi-enabled SD memory card for cameras, announced that they would have a mobile...