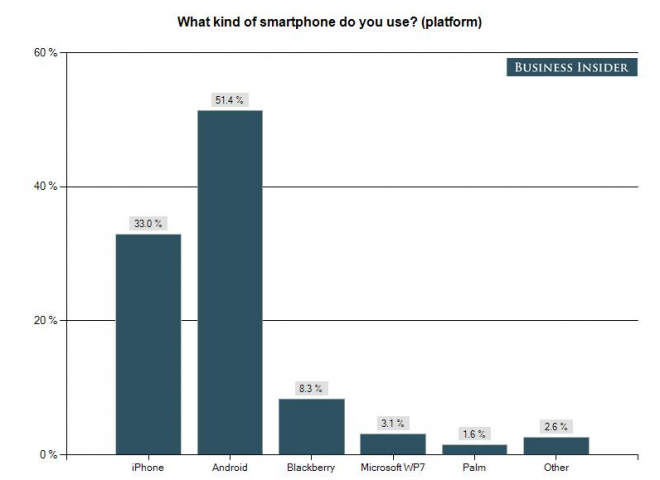 You just have to love these iPhone/iOS versus Android market share stories. They’re almost meaningless, but people are still so damn passionate about them. And while they do offer little to no value in many cases, as I’ve stated before, what they reveal is what no one else is talking about: that players like RIM, Microsoft and Palm/HP are slipping far behind. As Android consistently gobbles up more market share every month, and iPhone creeps up right behind it, we never hear about BlackBerry or Windows Phone 7 devices and how they’re faring.

BusinessInsider conducted a survey recently to see which smartphones people are using and what their future buying plans are. It offers no real surprises, but it’s also worth noting that there were about 2,000 responses — hardly conclusive and, given BusinessInsider’s generally tech savvy audience, hardly representative of the rest of the country.

According to its survey, 51% of BI readers use Android, 33% use the iPhone and the rest is comprised of BlackBerry, Windows Phone 7, Palm and “others.” It’s sad when the rest of the platforms combined don’t even add up to the number of iPhone users, but we really aren’t seeing any compelling handsets or platform features from the other manufacturers and software makers. Windows Phone 7 is probably the most promising, since it’s very young and has a bit of potential, but BlackBerry’s platform is a dinosaur – though it might soon be revived by the BlackBerry 7 OS we’re all hearing about – and HP seems to be focusing all its efforts on its new tablet.

Take what you will with all these numbers and the survey, but it has already been noted that the iPhone alone is twice the size of Google as a business, and that Apple’s value share in the smartphone market is greater than every other manufacturer combined.