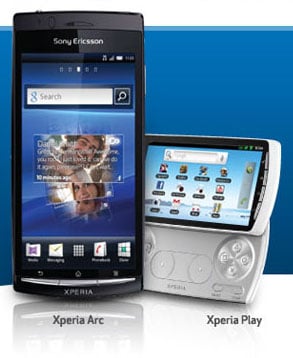 You may or may not recall my past posts on the Rogers Xperia arc and Play. Both devices are due to hit Rogers on April 28th. At least, that’s the last we heard.

Adding to the slowly growing pile of news surrounding these 2 Android-powered handsets is… the pricing. Our good friends at MobileSyrup managed to land a tipster with pricing details in-hand. Here’s the skinny.

Again, here’s a refresher from a previous post on the arc and Play:

On the flip-side of the coin is the Xperia PLAY. It packs very similar features, with one difference… a slide-out game pad for those that like to… well… play! The device is actually PlayStation certified, combining some awesome games with the fully functional slide out D-Pad for a more ‘hardcore’ gaming experience. It’s pretty nifty for sure, if you’re into that kind of thing. Other key specs include Android 2.3 OS, a 4? (854 x 480) display, 5.1 MP camera with 16x zoom and video, 512 MB internal memory (expandable to 32GB via microSD), WiFi and GPS.

That’s it for now. Stay tuned as the launch date for these devices draws near. Should be interesting to see how Canadians take to the latest Sony Ericsson Xperia devices to hit the scene.

Note: It’s also come to light that both devices will ship with a microSD card. The arc will come with a 16GB card, while the Play will pack an 8GB card in the box. Because the Play is going to be a ‘gamers delight’, it’ll come loaded up with FIFA 10, Madden 2011, Crash Bandicoot, Star Battalion, Bruce Lee Dragon Warrior, Asphalt 6: Adrenaline, and The Sims 3. Good stuff!

REVIEW: T-Mobile Sidekick 4G with Android – The Sidekick is back!

Just when we thought the Sidekick was totally dead, T-Mobile revived the iconic handset with a new manufacturer and new...