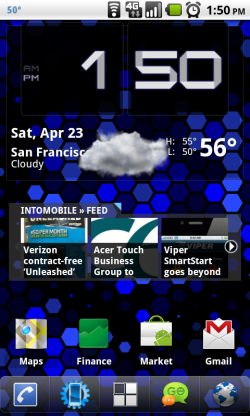 If you’ve been using Android for the past couple of years, you may have noticed that there’s no elegant way to take screenshots without either rooting the device, or having to set up the SDK. Installing the SDK and rooting your Android phone isn’t hard these days, but it may not be worth just to take screenshots. Well, to our surprise the T-Mobile G2X, as well as its European cousin, the Optimus 2X take screenshots easily.

While sifting through the XDA forums, I came across a problem I’ve seen with Tegra 2 devices. Screenshots, whether you’ve rooted your device or use the built-in ddms program from the SDK, do not come out right. You’re either given a blank screen, or like the G2X, LG’s logo. Well, it looks like LG thought this one through, and all you need to do to take a screenshot is press Power + Home at the same time. Easy.

We hope to see more handset makers implement this simple feature that iPhone users have had since iOS 2.x. We’ve seen some custom Android ROMs implement the feature similarly, like MIUI, but we’ve never seen it officially implemented until now (unless we’ve been missing this the entire time, which likely isn’t the case). Screenshots may not be the most important feature around, but not having an easy way to take them can be frustrating when you want to take one and you’re not rooted or next to a computer.

While this likely won’t be the determining factor for purchasing the G2X, it certainly adds to the reasons we think this device is about as solid as a phone can come today. LG is making some serious strides in the Android landscape, and something as simple as this makes us love what they are doing even more.

So with two phones down, and hundreds to go, let’s hope this feature is implemented within Android itself in a future release.

Investors are betting big on Android and its open ecosystem - and given its rapidly growing market share, why wouldn't...