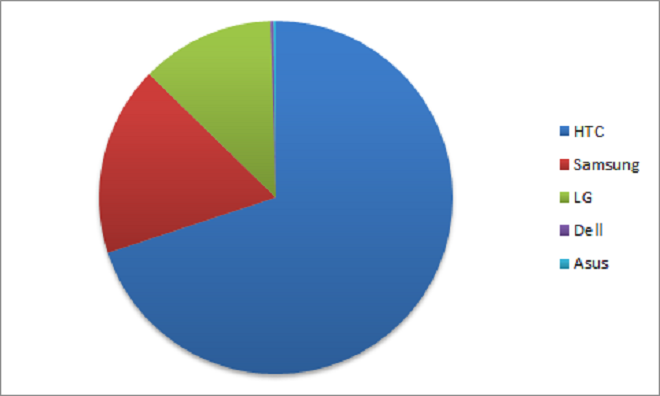 It’s been a few months since we’ve seen the release of the Windows Phone 7 platform and while total sales numbers are still a little vague (at least more than 2 million units since launch, we think), we still want to know how the handset makers are doing with this operating system. We don’t have exact data but the rough data form AdGAC ad control indicates that HTC is running away with the market.

As you can see from the chart above, HTC has the dominant share of Windows Phone 7 market share. That seems to make sense, as it has multiple models to choose from.

If you’re looking for a unique form factor, HTC can give you the Surround with a slide-out speaker. Those wanting a a full touch interface can utilize the HTC HD7 (and soon, the HD7S) and those yearning for a full QWERTY keyboard can rock the HTC Arrive on Sprint.

While HTC is deep in Android territory nowadays, it has been a valued partner of Microsoft for a long time, so don’t look for it to turn its back on Windows Phone 7. There are already rumors that it will have a Windows Phone 7 device with a 16-megapixel camera in the near future.

Samsung appears to be the second-largest maker of Windows Phone 7 devices, as the AT&T Focus has received a nice marketing campaign and the Omnia 7 is selling well in various markets. LG is in third place and Dell and Asus are picking up the scraps.

All of these early numbers may be meaningless in a year from now, as we’re expecting Nokia to be the dominant Windows Phone 7 manufacturer around the globe. We’re still not sure how big that market will be but you can be sure the world’s largest handset maker will be trying to produce phones at a high volume.

Google may use Spotify to power Android Music service

Hot off the news that Apple has just polished off its cloud music service, Google is reportedly in talk with...