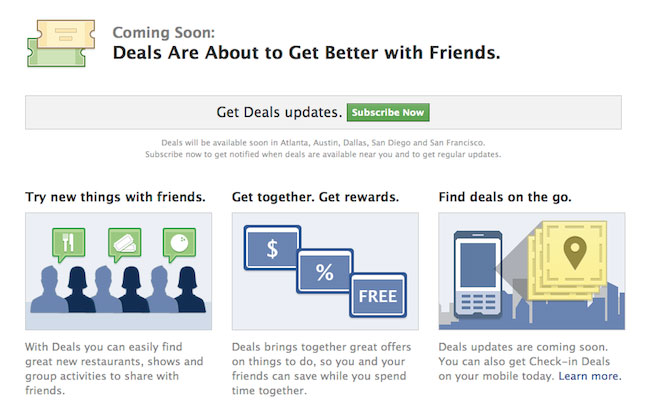 Because these deals will be tightly integrated into the social network, it will be easy for users to share deals with friends and see what deals their friends have purchased. Initially, these deals will focus on social activities like concerts, entertainment, dining or other public events. Offers will come from Facebook as well as Open Tables, a restaurant deals service, PopSugar City which caters to women and Zozi, an excursion and adventure deals site.

Facebook Deals will offer a distinct advantage over its competitors such as Groupon or LivingSocial. While Groupon requires you to login to the service via the web or a mobile app, Facebook Deals will be part of your everyday Facebook experience and will likely appear on mobile devices as well as the main website. Presumably, Facebook will also use profile information to send deals relevant to you. This personalization gives the social network a leg up over services like Groupon which do not have the large treasure trove of personal information on each user that Facebook does.

Deals may also integrate with Facebook credits, the virtual currency used to buy in-game virtual goods. Facebook credits will be expanded to let Facebook users buy new offers and will increase the reach of this online payment system. All in all, this endeavor may serve to boost Facebook’s bottom line and will hopefully light a fire under these other services that offer group deals. Are you ready for the inevitable onslaught about to hit your handset?