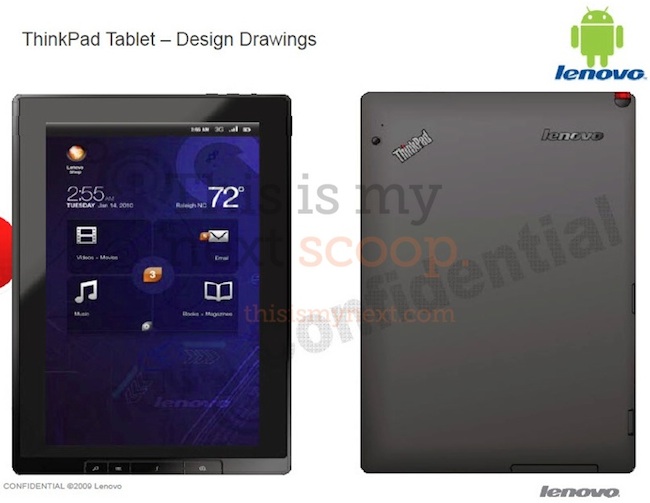 When Lenovo purchased IBM’s PC division back in 2005, many diehard ThinkPad enthusiasts wondered what the then unknown Chinese company would do to the ThinkPad brand. The name itself, ThinkPad, has always stood for highly engineered notebook computers that only come in one color, black, and are also more durable than your average notebook computer. Don’t forget about the keyboard either, toted as one of the best in the industry by anyone who reviews laptops for a living. Lenovo thankfully hasn’t bungled up the ThinkPad name, but innovation has slowed down quite a bit. Anyway, with that historical perspective in mind, it’s odd then that we have to report this latest rumor, as dugg up by Joanna Stern, former Engadget writer, of a ThinkPad tablet. That’s right, a ThinkPad that A) doesn’t have an Intel processor inside (The X110e and X120e are bastard ThinkPads and don’t count), and B) runs an operating system other than Microsoft’s Windows.

Said ThinkPad tablet has a 10.1 inch IPS display, meaning that it’ll have better color reproduction and viewing angles than that of a typical LCD display, with a resolution of 1280 x 800 pixels. Inside there’s an NVIDIA Tegra 2 and it runs Android 3.0 Honeycomb, but Lenovo have gone ahead and tweaked the OS a bit to provide more enterprise friendly features. It’s too early to say whether the skin they’ve thrown on top of Honeycomb hurts or helps the user experience, but here at IntoMobile we’re fans of the virgin Android experience that Google designs in house. There’s a camera on the front, a camera on the back, it’ll come in 16, 32, and 64 GB versions, and there’s even a pen involved, which … yea, there’s not much to say about stylus driven devices that hasn’t been said already.

Is this product something that excites you or makes you want to send a nasty email to Lenovo, telling them to stop watering down the famous ThinkPad brand?

We told you Sony Ericsson is preparing to launch Android-powered Walkman smartphones and voila - the first such device has...