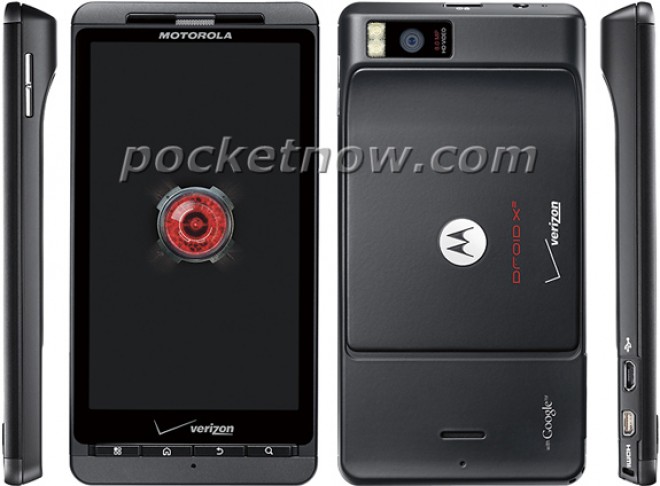 The Motorola Droid X^2 is all but official for Verizon, and now we have some official press shots of the new handset to gawk at. With the exception of the absent camera shutter button, the Droid X^2 remains largely the same as the original in terms of aesthetics, but the guts are the biggest difference, and that’s what really counts.

Expected to ship with a 1.2 GHz NVIDIA Tegra 2 dual-core processor,  and 4.3 inch qHD display, the DX^2’s spec bumps may be far and few between, but they make all the difference. The speed boost from the new dual-core CPU gives it plenty of raw processing power to take on any task you throw at it, while the qHD display will make text and videos appear more crisp and clear. Add these new features to the original’s already impressive spec sheet, and you have yourself a solid successor worthy of gaining Droid X sequel status.

While it’s still not confirmed, we’ll likely see the DX^2 ship with Android 2.2 Froyo, with the 2.3 Gingerbread update following shortly. The original shipped with the Motoblur skin, but a more toned-down version of the UI. The Droid X 2 will ship with a new version of the skin, and should bring some new useful features to the table, but that still doesn’t make us love what Motorola has done to the look and feel of the OS. If we’re lucky, maybe Motorola has listened to its users, and will let the handset’s bootloader to be unlocked. This would make way for custom ROMs that don’t feature Motoblur.

Since we don’t expect this to be a 4G/LTE device, the Droid X 2 will likely stay at the standard $199 price on a new two-year contract. Those of you who are looking for a 4G Motorola Android phone from Verizon may have to wait a bit longer, as the Droid Bionic may not make its debut until Q3 of this year.

The Droid X 2 still has no firm release date that we know of, but it can’t be long now before the phone graces Verizon’s shelves.

HTC Doubleshot to be an Android Gingerbread-toting QWERTY slider?

Early last month we got word of an upcoming device from HTC destined to land on T-Mobile USA, the Doubleshot....