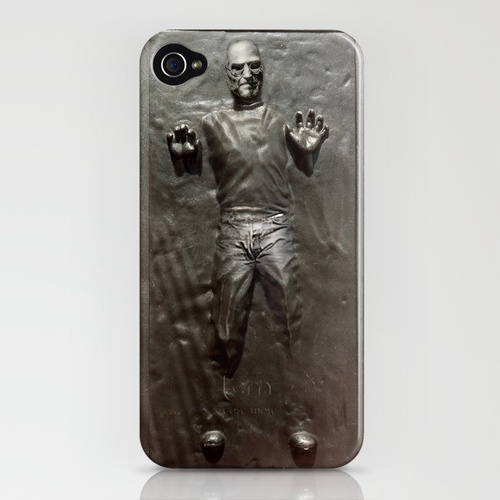 Sometimes an accessory catches me off guard. You know, it punches you in the face with something so unusual that there really are no words to describe it. That said… with this one, I’ll give it a try.

New from the folks at society6 comes a Star Wars inspired case for your iPhone 4, 3GS and 3G. Remember the scene where Han Solo is encased in carbonite? Well, in some sort of weird, twisted, and geek-tacular tribute, the ‘Steve Jobs in Carbonite’ case replicates this scene with vivid detail.

The unit itself is one piece, and promises to be impact resistant. It features a rather slim profile, so if you’re not a fan of bulky accessories, but ARE a fan of Star Wars and Apple goodness… I have a feeling you may want to pick one of these up.

Use the force. Or something.

The somewhat elusive and not-so-mythical white iPhone 4 - you know, the one that has been popping up in inventory...