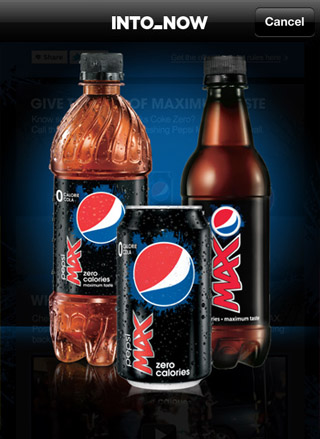 IntoNow, the mobile application/service that works like Shazam for video which has been acquired by Yahoo, has teamed-up up with PepsiCo for a novel campaign, allowing its users to get a free 20oz Pepsi MAX simply by tagging the new Pepsi MAX commercial.

The first 50,000 IntoNow users who have tagged the Pepsi MAX Major League Baseball commercial got a coupon which is redeemable at major retailers nationwide including Target and CVS.

According to IntoNow’s press release, this is the first time that an automated technology like this has been used to “bridge the gap from television commercial to real world product.” Coupons are redeemable through December 31, 2011.

If you haven’t read our previous post on IntoNow, you should know it’s a free application that can automatically identify live TV content and any previously aired content from the past five years. Users can tag the identified content and find out what their friends are watching, initiating a conversation around a shared interest. At the moment, the IntoNow mobile application is available for the iPhone, only…

A week ago we talked about Nokia's new version of Ovi Maps which comes with photorealistic 3D cities. The Finnish...